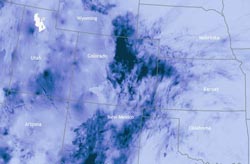 The dark blue areas over Colorado indicate regions that received more than 1,000 percent of their normal rainfall for Sept. 10-16, 2013. Courtesy of the U.S. National Weather Service Advanced Hydrologic Prediction Service.<br>

Two University of Iowa researchers recently tested the ability of the world’s most advanced weather forecasting models to predict the Sept. 9-16, 2013 extreme rainfall that caused severe flooding in Boulder, Colo.

The results, published in the December 2013 issue of the journal Geophysical Research Letters, indicated the forecasting models generally performed well, but also left room for improvement.

During September 2013, Boulder County and surrounding areas experienced severe flooding and heavy rain resulting in fatalities, the loss of homes and businesses, and the declaration of a major disaster.

After the storms had subsided, Lavers and Villarini decided to examine how well some of the leading NWP models had done. As a constantly improving science, NWP involves integrating current weather conditions through mathematical models of the atmosphere-ocean system to forecast future weather. For their study, the researchers selected the actual rainfall forecasts made by eight state-of-the-art global NWP models for the period of the Colorado floods.

“Overall, these models tended to underestimate rainfall amounts and placed the rainfall in the wrong area, even though they provided an indication that a period of heavy rainfall was going to affect parts of Colorado,” says Gabriele Villarini, study co-author, assistant professor in the UI College of Engineering Department of Civil and Environmental Engineering and assistant research engineer at IIHR.

In their study, Lavers and Villarini used a reasonably coarse (having a relatively low number of pixels) global model output. The UI researchers emphasize that higher spatial resolution NWP models are likely to have captured the rainfall to a greater extent.

Says Lavers: “It is hoped that the continuing development of finer resolution NWP models that resolve the complex atmospheric motions in mountainous terrain, such as the Rocky Mountains, will make it possible to improve the forecasting capabilities of such extreme rainfall events.”

The paper is formally titled: “Were global numerical weather prediction systems capable of forecasting the extreme Colorado rainfall of 9-16 September 2013?”

The research was supported by IIHR, the Iowa Flood Center, and the U.S. Army Corps of Engineers Institute for Water Resources.