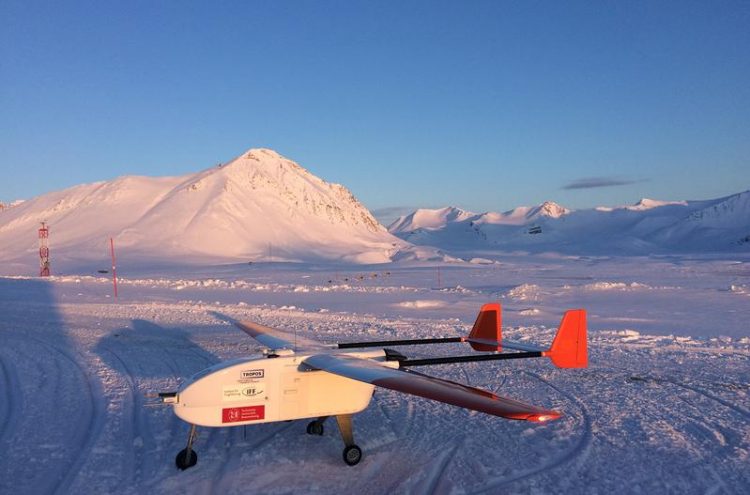 This is the unmanned airplane ALADINA in front of Mount Zeppelin near Ny-Ålesund. Credit: Konrad Bärfuss, TU Braunschweig

Ny-Ålesund (Spitsbergen). Investigations of the atmosphere by means of unmanned mini-airplanes can contribute significantly to the investigation of the causes of Arctic climate change, as they provide an insight into ground-level air layers that are not monitored by other measuring stations. This is the conclusion drawn by a German research team from current measurements that have just taken place on Spitsbergen.

It was possible to observe the formation of new particles in the air, which can later evolve to clouds and have an influence on climate change. It is still not understood in detail why the Arctic is warming more than twice as strong as other regions of the earth. The measurement campaign on Spitsbergen, which will run until the end of May, was the first joint deployment of mini research aircraft developed in Germany in a polar region.

During the last years the Arctic has increasingly become a focus of climate research, due to the fact that the climate changes observed so far in the Arctic have a much stronger impact than in other regions. The reasons are complex interactions between atmosphere, sea ice and ocean – difficult to quantify and to describe in models.

In order to improve the understanding of the specific processes and interactions, more measurements have to be done on site. Yet only a few continuously measuring stations and mobile measurements with ships and aircrafts are available as a database to provide the necessary parameters for analysis and modelling.

Scientists from the Technical University of Braunschweig, the Leibniz Institute for Tropospheric Research Leipzig and the Eberhard-Karls University of Tübingen have been performing measurements with unmanned flight systems since mid-April in Ny-Ålesund on Spitsbergen, the northernmost village in the world. This project is supported by the Alfred Wegener Institute, the Helmholtz Centre for Polar and Marine Research which also operates the French-German research base AWIPEV in Ny-Ålesund.

In the project, funded by the German Research Foundation (DFG) and entitled “Investigations into the small-scale vertical and horizontal variability of the atmospheric boundary layer aerosol with unmanned aerial systems”, the correlation between small-scale air turbulence and the formation of the smallest airborne aerosol particles that can form from gases is investigated in particular. Since these small particles can grow and then scatter light and also influence the formation of clouds, they play a major role in the climate.

The first evaluations show different scenarios leading to the formation of new particles in the atmosphere: either the new formation takes place simultaneously in all investigated air layers between ground and 850 meters height or it begins in a certain air layer and continues from there. The second case cannot be observed from the initial with the fixed measuring stations in Ny-Ålesund and the nearby Zeppelin Mountain, which have been in continuous operation for many years, and is therefore an important finding for all the scientists involved.

“The measurements with unmanned aeroplanes represent a connection between the measurements at various sites in Ny-Ålesund and on the adjacent Zeppelin Mountain and thus close a knowledge gap on the distribution and transport processes in the atmosphere,” explains Dr. Astrid Lampert of the Technical University of Braunschweig, who coordinated the measurement campaign.

The measurement campaign was the third major study by ALADINA (Application of Light-weight Aircraft for Detecting IN-situ Aerosol), an Unmanned Aircraft System (UAS) of the type “Carolo P360”, which was developed at the Institute of Aerospace Systems at Braunschweig Technical University. ALADINA is a type of high-tech model aircraft: It has a wingspan of 3.6 metres, weighs 25 kilograms and can transport up to 3 kilograms of payload. The battery allows a flight time of up to 40 minutes and a speed of up to over 100 kilometres per hour.

The mini research aircraft has already been used several times in Germany – for example at the TROPOS measurement station Melpitz near Torgau. The special feature of this aircraft is especially its equipment with particle measuring devices, which were miniaturized at the Leibniz Institute for Tropospheric Research in Leipzig. Since commercially available devices would be too large and heavy for this application, the devices needed to be developed or considerably modified internally.

The University of Tübingen also used MASC (Multi-purpose Airborne Sensor Carrier) UAS as part of its Spitsbergen campaign. These UAS are specialized in the high-resolution measurement of atmospheric turbulence and turbulent transport of energy and impulses. Turbulence is an important process in particle formation processes. MASC have a flight time of one and a half hours in the Arctic and are increasingly used in wind energy research in Germany.

In order to understand the various processes that can induce particle formation, now a detailed analysis of the measurement data is necessary, which will be the scientist's main task for the next months.

ALADINA (Application of Light-weight Aircraft for Detecting In situ Aerosol)

AWIPEV Base: French – German Arctic Research Base at Ny-Ålesund / Spitsbergen