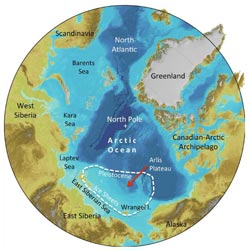 Geologists and geophysicists of the Alfred Wegener Institute, Helmholtz Centre for Polar and Marine Research (AWI), discovered traces of large ice sheets from the Pleistocene on a seamount off the north-eastern coast of Russia.

These marks confirm for the first time that within the past 800,000 years in the course of ice ages, ice sheets more than a kilometre thick also formed in the Arctic Ocean. The climate history for this part of the Arctic now needs to be rewritten, report the AWI scientists jointly with their South Korean colleagues in the title story of the current issue of the scientific journal Nature Geoscience.

AWI geologist Dr. Frank Niessen and colleagues had already discovered the first signs of conspicuous scour marks and sediment deposits on the ocean floor north of Wrangle Island (Russia) on a Polarstern expedition in 2008. However, they were unable to gather extensive proof until last year, during an Arctic expedition on the South Korean research vessel Araon. “After we had analysed the bathymetric and seismic data from our first voyage, we knew exactly where we needed to search and survey the ocean floor with the swath sonar of the Araon on the second expedition,” said Frank Niessen, the first author of the study.

The result of this research is a topographic map of the Arlis Plateau, a seamount on which deep, parallel-running furrows can be discerned on the upper plateau and the sides – and over an area of 2500 square kilometres and to an ocean depth of 1200 metres. “We knew of such scour marks from places like the Antarctic and Greenland. They arise when large ice sheets become grounded on the ocean floor and then scrape over the ground like a plane with dozens of blades as they flow. The remarkable feature of our new map is that it indicates very accurately right off that there were four or more generations of ice masses, which in the past 800,000 years moved from the East Siberian Sea in a north-easterly direction far into the deep Artic Ocean,” says Frank Niessen.

These new findings overturn the traditional textbook view of the history of Arctic glaciations. “Previously, many scientists were convinced that mega-glaciations always took place on the continents – a fact that has also been proven for Greenland, North America, and Scandinavia. However, it was assumed that the continental shelf region of North-eastern Siberia became exposed in these ice ages and turned into a vast polar desert in which there was not enough snow to enable a thick ice shield to form over the years. Our work now shows that the opposite was true. With the exception of the last ice age 21,000 years ago, ice sheets formed repeatedly in the shallow areas of the Arctic Ocean. These sheets were at least 1200 metres thick and presumably covered an area as large as Scandinavia,” says Frank Niessen.

The AWI scientists still cannot say for certain, however, under what climate conditions these ice sheets formed and when exactly they left their marks on the bottom of the Arctic Ocean. “We theorize that the East Siberian ice sheets arose during various ice ages when the average global temperature was around five to eight degrees Celsius cooler than what it is today. But evidently this relatively minor temperature difference was often sufficient to allow initially thin ocean ice to grow into an immense ice cap. An example that shows just how sensitively the Arctic reacts to changes in the global climate system,” says the geologist.

In a next step, the AWI researchers now want to try collecting soil samples from deeper layers of the ocean floor with a sediment core drill and thus learn more details about the prehistoric ice sheets. “Our long-term goal is to reconstruct the exact chronology of the glaciations so that with the aid of the known temperature and ice data, the ice sheets can be modelled. On the basis of the models, we then hope to learn what climate conditions prevailed in Eastern Siberia during the ice ages and how, for example, the moisture distribution in the region evolved during the ice ages,” says Frank Niessen. This knowledge should then help predict possible changes in the Arctic as a consequence of climate change more accurately.

Frank Niessen and his colleagues are anticipating a great number of surprising discoveries in the Arctic Ocean in the future.

“As the Arctic Ocean sea-ice cover continues to shrink, more formerly unexplored ocean area becomes accessible. Today less than ten percent of the Arctic Ocean floor has been surveyed as thoroughly as the Arlis Plateau,” says the AWI geologist. And this study would not have succeeded were it not for the outstanding cooperation of the AWI scientists with researchers of the South Korean Polar Research Institute KOPRI. “We complemented each other perfectly in this research. Our South Korean colleagues had the expedition and ship time, we knew the coordinates of the area in which we now found the evidence of the mega-glaciations,” says Frank Niessen.

Ice ages:
About 2.7 million years ago the global climate cooled considerably. We have had a permanent ice cap on Greenland ever since. Then came around 55 changes between ice ages and warm periods until today. About 800,000 years ago the magnitude and duration of the glaciations in the Northern Hemisphere increased considerably. Since then the world climate has regularly alternated between two extremes: each cycle of an ice age followed by a warm period now lasts 100,000 years. Warm periods or interglacials, such as the “Holocene” in which we are living, only lasted about 10,000 to 15,000 years. Afterwards the ice masses on the continents began to grow once again, causing the sea level to drop as much as 130 metres compared to today at the peaks of the glacial cycles. Vast areas of the northern continents were then covered by kilometre-thick ice masses, which, for example, expanded over and over again from Scandinavia even into Northern Germany. The last time that this happened was 21,000 years ago. Thus far there has been little research on the role of the Arctic Ocean in this interplay.

Follow the Alfred Wegener Institute on Twitter (https://twitter.com/#!/AWI_de) and Facebook (http://www.facebook.com/AlfredWegenerInstitut) to obtain all current news and information on everyday stories from the life of the Institute.