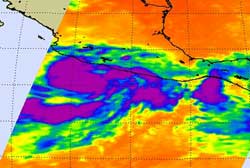 NASA's Aqua satellite passed over Tropical Storm Beatriz on June 20 at 08:11 UTC and the AIRS instrument captured this infrared image of the storm. The image showed a more rounded and organized circulation with strong convection (purple) and cloud tops as cold as -63F/-52C.<br>Credit: NASA/JPL, Ed Olsen <br>

Beatriz formed from the low pressure area System 92E that NASA and JAXA's Tropical Rainfall Measuring Mission (TRMM) was watching last week. The low pressure area was coming together on Friday, June 17 and had some isolated areas of heavy rainfall. Those areas of heavy rainfall have increased as the low organized and strengthened over the weekend. On June 19 at 11 a.m. EDT it became tropical depression two-E. Just three hours later it reached tropical storm strength and was named Beatriz.

Infrared imagery on June 19 and 20 from the Atmospheric Infrared Sounder (AIRS) instrument that flies aboard NASA's Aqua satellite showed that cloud tops are cooling, indicating growing and higher thunderstorms. Typically – the higher the thunderstorm, the stronger the storm. Those cloud top temperatures in infrared imagery reached the threshold of strongest storms/coldest cloud tops, for the AIRS data of temperatures as cold as or colder than -63 Fahrenheit (-52 Celsius).

By June 20 at 08:11 UTC (4:11 a.m. EDT) the AIRS instrument on NASA's Aqua satellite showed a more rounded and organized circulation with strong convection. Meteorologists at the National Hurricane Center use this data with other satellite data in their forecasts and expect Beatriz to reach hurricane status later today.

Maximum sustained winds were near 65 mph/100 kmh). It was about 125 miles (205 km) south-southwest of Lazaro Cardenas, Mexico and 210 miles (335 km) south-southeast of Beatriz is moving to the northwest near 9 mph (15 kmh) and has a minimum central pressure of 995 millibars.

Coastal communities in the warning and watch area should be prepared for tropical storm conditions today followed by hurricane conditions tonight. Rainfall is expected to be excessive between 6 and 12 inches in the states of Guerrero, Jalisco, Colima and Michoacan in southwestern Mexico with isolated amounts to 20 inches in mountainous areas. That means life-threatening flash floods and mudslides are possible. Coastal areas, however, face flooding from storm surge.