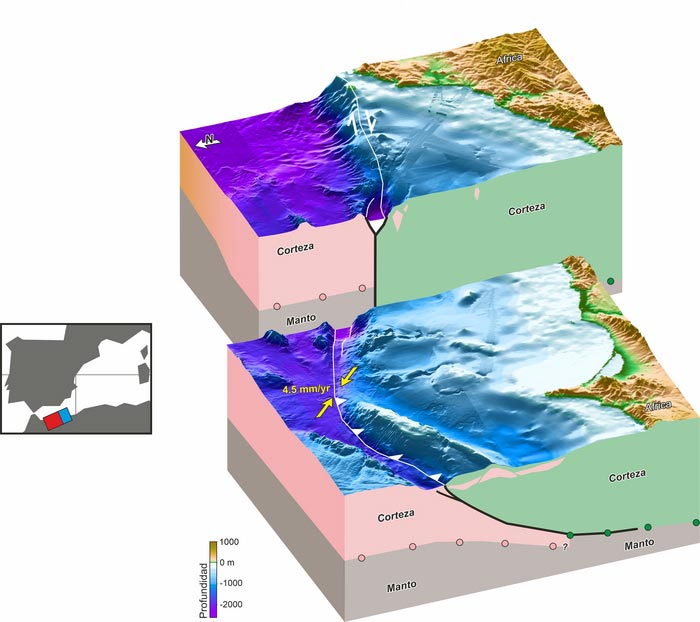 The fault system linking the European and African plates extends over a length of 300 kilometers / ICM-CSIC.
Credit: ICM-CSIC

… could cause large tsunamis.

Due to a lack of data, the studies available so far underestimated the seismic and tsunami risk of these large faults.

A new study led by the Institut de Ciències del Mar (ICM-CSIC) in Barcelona and the Institució Catalana de Recerca i Estudis Avançats (ICREA) has revealed the exact location of the boundary between the European and African tectonic plates, located in the Alboran Sea region. The work also evaluates its potential capacity to produce large earthquakes that, in turn, could trigger devastating tsunamis on the coast.

The paper, recently published in the prestigious journal Nature Communications, defines for the first time the complex geometry of this active faults system and describes how they have been moving over the last 5 million years. Finally, the work demonstrates that the system has absorbed almost all of the deformation from plate collision in this region.

“The quality of our data has allowed us to study, for the first time, the deep structure of these faults, and thus quantify the deformation they accumulate. The results show that this is one of the most important fault systems in the region and that it has been absorbing most of the deformation caused by the collision of the Eurasian and African plates,” explains Laura Gómez de la Peña, ICM-CSIC researcher and lead author of the study.

Although the geological structure of the Alboran Sea subsurface has been extensively studied since the 1970s, until now the data were not sufficiently precise to understand the tectonics of the area. However, the quality of the data and the modern methodologies used to carry out this work has made it possible to characterize in detail a system of active faults that extends over 300 kilometers long and is now considered the most important, in terms of deformation accumulation, in the Iberian Peninsula.

“To carry out the study we used the latest data acquisition techniques on board the Spanish oceanographic vessel Sarmiento de Gamboa, and the processing was specifically designed to be able to observe the structures described now for the first time,” details the ICM-CSIC researcher and ICREA professor César R. Ranero, who has also participated in the study.

Until now, it was unknown whether the Alboran Sea had large active faults, as well as the exact location of the tectonic boundary where the European and African plates collide. This knowledge is key to reassess the seismic and tsunami risk to which the coastal areas of the western Mediterranean are exposed.

In fact, in another study by the same group of experts in collaboration with GEOMAR  (Germany) and INGV (Italy) the authors delve into the tsunamigenic potential of this plate boundary and suggest that this may be greater than previously thought. Most previous studies on seismic and tsunami risk did not correctly consider these large faults due to lack of data, so the risk had been underestimated.

“These studies are a first appraisal of the seismic and tsunami potential of these large faults, which until now were almost completely unknown to us and which must be thoroughly evaluated in future studies,” concludes Gómez de la Peña.