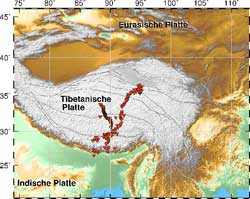 This plate is moved from south to north-east over the Eurasian plate and pushes it down 250 kilometres deep into the mantle.

This new view on the plate tectonic collision of India and Eurasia was presented by team of scientists from the GFZ German Research Centre for Geosciences in cooperation with Chinese, American and British scientists in the latest issue of “Nature Geosciences” (Advance Online Publication on Nature Geoscience).

The Indian tectonic plate is currently moving at a speed of about five centimetres per year to the northeast. “/In its collision with Eurasia it pushes the Himalayas and the Tibetan plateau up like a bulldozer, bores itself 500 kilometres under Tibet and is clearly detectable up to a depth of about 250 kilometres. We had already shown that in our previous studies/”, says Professor Rainer Kind of the GFZ (Helmholtz Association). “/But until now there was not enough data to see how the tectonic plates behave in the collision on the northern edge of Tibet/.”

In continuation of earlier joint experiments, the team of geoscientists therefore carried out an additional major seismological project in northern Tibet. With this so-called “receiver function” method, the boundary layers of different materials are mapped within the Earth using seismic waves from distant earthquakes, practically scanning the subsurface of Tibet from below. From the results the deformation of the tectonic plates can be determined.

The images of the Earth's interior up to several hundred kilometres depth obtained with this method are of a much higher resolution than any previous images. As a result, the newly discovered Tibetan plate appears as a much more defined, independent area in this part of the lithosphere between India and Eurasia, south of the Tarim Basin.