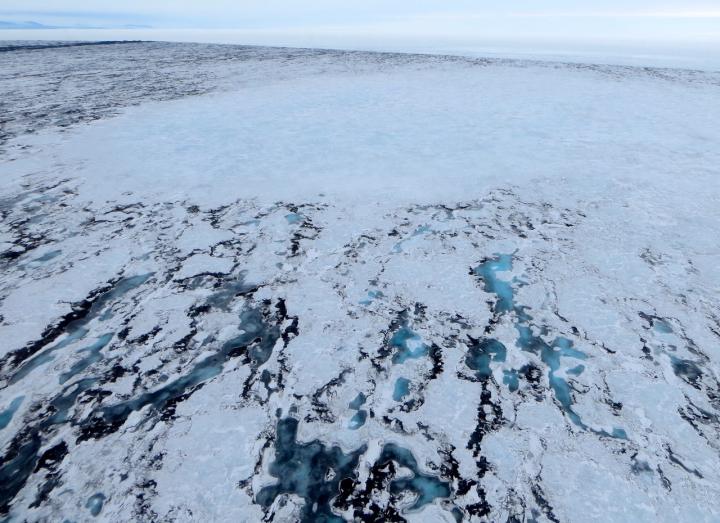 A team of British and American researchers, co-led by the University of Cambridge, has measured how much the McMurdo ice shelf in Antarctica flexes in response to the filling and draining of meltwater lakes on its surface.

This type of flexing had been hypothesised before and simulated by computer models, but this is the first time the phenomenon has been measured in the field. The results are reported in the journal Nature Communications.

The results demonstrate a link between surface melting and the weakening of Antarctic ice shelves and support the idea that recent ice shelf breakup around the Antarctic Peninsula may have been triggered, at least in part, by large amounts of surface meltwater produced in response to atmospheric warming.

As the climate continues to warm, more and more ice shelves may become susceptible to flex, fracture and break up over the coming century.

Most of the Antarctic continent is covered by the Antarctic Ice Sheet, which is up to four kilometres thick and contains enough ice to raise global sea levels by about 58 metres. Over most of the continent and for most of the year, air temperatures are well below zero and the ice surface remains frozen.

But around 75% of the ice sheet is fringed by floating ice shelves, which are up to a kilometre thick, mostly below sea level, but with tens of metres of their total height protruding above the water. In the summer months, when air temperatures rise above freezing, the surfaces of these ice shelves are susceptible to melting.

“Over 100 years ago, members of both Shackleton's Nimrod team and the Northern Party team of Scott's British Antarctic Expedition mapped and recorded water on the Nansen Ice Shelf, around 300 kilometres from where we did our study on the McMurdo Ice Shelf. For the last few decades, it has also been possible to see widespread surface meltwater forming on many ice shelves each summer from satellite imagery.”

What is not fully known is the extent to which surface water might destabilise an ice shelf, especially in warmer summers when more meltwater is produced. If the slope of the ice shelf is sufficiently steep, the water may flow off the ice shelf to the ocean in large surface rivers, mitigating against any potential instability.

The danger comes if water pools up in surface depressions on the ice shelf to form large lakes. The extra weight of the water will push down on the floating ice, causing it to sink a bit further into the sea. Around the edge of the lake, the ice will flex upwards to compensate.

“If the lake then drains, the ice shelf will now flex back, rising up where the lake used to be, sinking down around the edge,” said lead author Dr Alison Banwell, also from SPRI. “It is this filling and draining of lakes that causes the ice shelf to flex, and if the stresses are large enough, fractures might also develop.”

Banwell and co-author Professor Doug MacAyeal from the University of Chicago had previously suggested that the filling and draining of hundreds of lakes might have led to the catastrophic breakup of the Larsen B Ice Shelf 2002 when 3,250 square kilometres of ice was lost in just a few days.

“We had been able to model the rapid disintegration of that ice shelf via our meltwater loading-induced fracture mechanism,” said Banwell. “However, the problem was that no one had actually measured ice shelf flex and fracture in the field, and so we were unable to fully constrain the parameters in our model. That's partly why we set out to try to measure the process on the McMurdo ice shelf.”

Using helicopters, snow machines and their own two feet, the researchers set up a series of pressure sensors to monitor the rise and fall of water levels in depressions which filled to become lakes, and GPS receivers to measure small vertical movements of the ice shelf.

“It was a lot of work to obtain the data, but they reveal a fascinating story,” said MacAyeal. “Most of the GPS signal is due to the ocean tides, which move the floating ice shelf up and down by several metres twice a day. But when we removed this tidal signal we found some GPS receivers moved down, then up by around one metre over a few weeks whereas others, just a few hundred metres away, hardly moved at all.

The ones that moved down then up the most were situated where lakes were filling and draining, and there was relatively little movement away from the lakes. It is this differential vertical motion that shows the ice shelf is flexing. We'd anticipated this result, but it was very nice when we found it.”

The team hope that their work will inspire others to look for evidence of flex and fracture on other ice shelves around Antarctica. Their work will also help in developing ice sheet scale models that could be used to predict the stability of ice shelves in the future and to understand the controls on ice shelf size since they act as buffers against fast-moving ice from the continent. As ice shelves shrink, glaciers and ice streams behind them flow more rapidly to the ocean, contributing to global sea level rise.

The work was funded by the US National Science Foundation, the Leverhulme Trust, NASA, and CIRES, University of Colorado, Boulder.