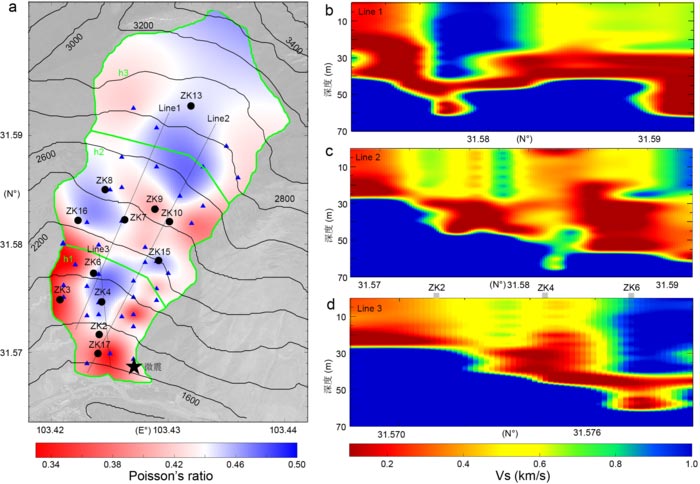 Landslides are recurrent geological phenomena on Earth that cause heavy casualties and property losses annually. While teleseismic receiver functions have been widely used for crust-mantle structure analysis, they have rarely been employed for inverting shallow structures, mainly because of their lower sensitivity due to Earth’s attenuation of high-frequency waves. Now researchers have pioneered the use of the high-frequency receiver functions of local earthquakes to invert the Poisson’s ratios and shear-wave velocities of the Quaternary Xishancun landslide.

Situated in the town of Tonghua, Li County, Sichuan Province, China, the Xishancun landslide is located in the Longmen Mountains of southwestern China, which is a transitional zone between the Sichuan Basin and the Tibetan Plateau. This zone is characterized by the recurrence of moderate to strong earthquakes related to the uplift of the Tibetan Plateau. The Xishancun landslide is approximately 50 km away from the epicenter of the 2008 MS8.0 Wenchuan earthquake. The deformation of the landslide further escalated after the earthquake, which created several cracks on the landslide surface, as well as severe damage to the residential buildings. The stability and treatment of the Xishancun landslide are urgent for scientific research and engineering tasks.

The researches find that, for the Xishancun landslide, the Poisson’s ratio values are generally higher than 0.33 and that the S-wave velocities vary from 0.1 km/s to 0.9 km/s. High Poisson’s ratios of >0.44 are mainly distributed at the juncture regions between different segments, as well as the western edge of h2. These zones show significant variation in landslide thickness and are potentially hazardous areas. Low velocities of 0.05–0.2 km/s with thicknesses of 10–30 m are widely observed in the lower layer of the landslide. The high Poisson’s ratios and low-velocity layer may be related to water-rich materials in these areas.

The study suggests that the high-frequency receiver functions from local earthquakes can be used to delineate geotechnical structures, which is valuable for landslide stability analysis and hazard mitigation.