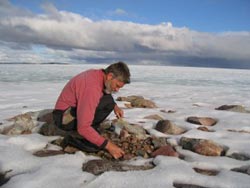 Gifford Miller collects long-dead tundra plants exposed by melting of an Arctic ice cap on Baffin Island, Canada. Using radiocarbon dating of plants from the Eastern Canadian Arctic, he and his colleagues have found that average summertime temperatures in the region are currently higher than at any time in the past 44,000 years. Credit: Gifford Miller<br>

Average summer temperatures in the Eastern Canadian Arctic during the last 100 years are higher now than during any century in the past 44,000 years and perhaps as long ago as 120,000 years, newfound evidence indicates.

The new research offers the first direct evidence that the present warmth in the Eastern Canadian Arctic exceeds the peak warmth there in the Early Holocene, when solar energy reaching the Northern Hemisphere in summer was roughly 9 percent greater than today, said Gifford Miller of the University of Colorado, Boulder (CU-Boulder), who led the study. The Holocene is a geological epoch that began after Earth’s last glacial period ended roughly 11,700 years ago and which continues today.

Miller and his colleagues used dead moss clumps emerging from receding ice caps on Baffin Island as tiny clocks. At four different ice caps, radiocarbon dates show the mosses had not been exposed to the elements since at least 44,000 to 51,000 years ago.

Since radiocarbon dating is only accurate to about 50,000 years and because Earth’s geological record shows it was in a glaciation stage prior to that time, the indications are that Canadian Arctic temperatures today have not been matched or exceeded for roughly 120,000 years, Miller said.

“The key piece here is just how unprecedented the warming of Arctic Canada is,” said Miller, a geological sciences professor and a fellow at the university’s Institute of Arctic and Alpine Research. “This study really says the warming we are seeing is outside any kind of known natural variability, and it has to be due to increased greenhouse gases in the atmosphere.”

A paper on the subject appeared online Oct. 21 in Geophysical Research Letters, a journal of the American Geophysical Union.

Miller and his colleagues compiled the age distribution of 145 radiocarbon-dated plants in the highlands of Baffin Island that were exposed by ice recession during the year they were collected by the researchers. All samples collected were within 1 meter of the ice caps, which are generally receding by 2 to 3 meters a year. “The oldest radiocarbon dates were a total shock to me,” said Miller.

Located just east of Greenland, the 508,000 square-kilometer (196,000-square-mile) Baffin Island is the fifth largest island in the world. Most of it lies above the Arctic Circle. Many of the ice caps on the highlands of Baffin Island rest on relatively flat terrain, usually frozen to their beds. “Where the ice is cold and thin, it doesn’t flow, so the ancient landscape on which they formed is preserved pretty much intact,” said Miller.

Ice melted by Arctic warming exposed dead plants
As ice caps today recede, like this one nicknamed Sputnik, they expose dead plants killed long ago when the ice cap formed and then preserved ever since by the ice. By carbon-dating the organic material, scientists can determine when the plants lived, thousands of years ago, and infer the average temperatures back then that allowed the plants to thrive. Credit: Gifford Miller

To reconstruct the past climate of Baffin Island beyond the limit of radiocarbon dating, Miller and his team used data from ice cores previously retrieved by international teams from the nearby Greenland Ice Sheet.

The ice cores showed that the youngest time interval from which summer temperatures in the Arctic were plausibly as warm as today is about 120,000 years ago, near the end of the last interglacial period. “We suggest this is the most likely age of these samples,” said Miller.

The new study also showed summer temperatures cooled in the Canadian Arctic by about 2.8 degrees Celsius (5 degrees Fahrenheit) from roughly 5,000 years ago to about 100 years ago – a period that included the Little Ice Age from 1275 to about 1900.

“Although the Arctic has been warming since about 1900, the most significant warming in the Baffin Island region didn’t really start until the 1970s,” said Miller. “And it is really in the past 20 years that the warming signal from that region has been just stunning. All of Baffin Island is melting, and we expect all of the ice caps to eventually disappear, even if there is no additional warming.”

Temperatures across the Arctic have been rising substantially in recent decades as a result of the buildup of greenhouse gases in Earth’s atmosphere. Studies by CU-Boulder researchers in Greenland indicate temperatures on the ice sheet have climbed 3.9 degrees Celsius (7 degrees Fahrenheit) since 1991.

Or, you may order a copy of the final paper by emailing your request to Thomas Sumner at tsumner@agu.org. Please provide your name, the name of your publication, and your phone number.