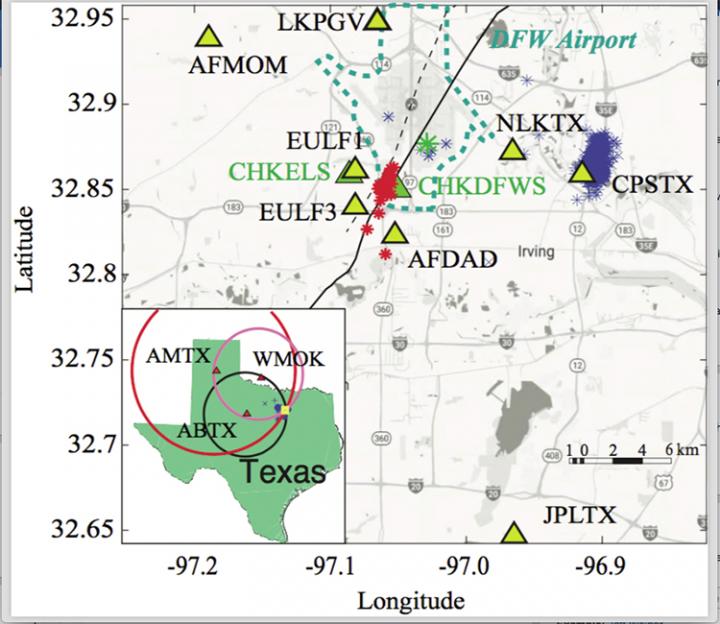 Efforts to stop human-caused earthquakes by shutting down wastewater injection wells that serve adjacent oil and gas fields may oversimplify the challenge, according to a new study from seismologists at Southern Methodist University, Dallas.

The seismologists analyzed a sequence of earthquakes at Dallas Fort Worth International Airport and found that even though wastewater injection was halted after a year, the earthquakes continued.

The sequence of quakes began in 2008, and wastewater injection was halted in 2009. But earthquakes continued for at least seven more years.

“This tells us that high-volume injection, even if it's just for a short time, when it's near a critically stressed fault, can induce long-lasting seismicity,” said SMU seismologist Paul O. Ogwari, who developed a unique method of data analysis that yielded the study results.

The earthquakes may be continuing even now, said Ogwari, whose analysis extended through 2015.

The study's findings indicate that shutting down injection wells in reaction to earthquakes, as some states such as Oklahoma and Arkansas are doing, may not have the desired effect of immediately stopping further earthquakes, said seismologist Heather DeShon, a co-author on the study and an associate professor in the SMU Earth Sciences Department.

“The DFW earthquake sequence began on Halloween in 2008 — before Oklahoma seismicity rates had notably increased,” said DeShon. “This study revisits what was technically the very first modern induced earthquake sequence in this region and shows that even though the wastewater injector in this case had been shut off very quickly, the injection activity still perturbed the fault, so that generated earthquakes even seven years later.”

That phenomenon is not unheard of. Seismologists saw that type of earthquake response from a rash of human-induced earthquakes in Colorado after wastewater injection during the 1960s at the Rocky Mountain Arsenal near Denver. Similarly in that case, injection was started and stopped, but earthquakes continued.

Such a possibility has not been well understood outside scientific circles, said DeShon. She is a member of the SMU seismology team that has studied and published extensively on their scientific findings related to the unusual spate of human-induced earthquakes in North Texas.

“The perception is that if the oil and gas wastewater injectors are leading to this, then you should just shut the injection wells down,” DeShon said. “But Paul's study shows that there's a lot to be learned about the physics of the process, and by monitoring continuously for years.”

Ogwari, DeShon and fellow SMU seismologist Matthew J. Hornbach reported the findings in the peer-reviewed Journal of Geophysical Research in the article “The Dallas-Fort Worth Airport Earthquake Sequence: Seismicity Beyond Injection Period.”

The DFW Airport's unprecedented earthquake clusters were the first ever documented in the history of the North Texas region's oil-rich geological system known as the Fort Worth Basin. The quakes are also the first of multiple sequences in the basin tied to large-scale subsurface disposal of waste fluids from oil and gas operations.

The DFW Airport earthquakes began in 2008, as did high-volume wastewater injection of brine. Most of the seismic activity occurred in the first two months after injection began, primarily within .62 miles, or 1 kilometer, from the well. Other clusters then migrated further to the northeast of the well over the next seven years. The quakes were triggered on a pre-existing regional fault that trends 3.7 miles, or 6 kilometers, northeast to southwest.

Ogwari, a post-doctoral researcher in the SMU Roy M. Huffington Earth Sciences Department, analyzed years of existing seismic data from the region to take a deeper look at the DFW Airport sequence, which totaled 412 earthquakes through 2015.

Looking at the data for those quakes, Ogwari discovered that they had continued for at least seven years into 2015 along 80% of the fault, even though injection was stopped after only 11 months in August of 2009.

Rate of quakes declined, but magnitude has never lessened

In another important finding from the study, Ogwari found that the magnitude of the DFW Airport earthquakes didn't lessen over time, but instead held steady. Magnitude ranged from 0.5 to 3.4, with the largest one occurring three years after injection at the well was stopped.

“What we've seen here is that the magnitude is consistent over time within the fault,” Ogwari said. “We expect to see the bigger events during injection or immediately after injection, followed by abrupt decay. But instead we're seeing the fault continue to produce earthquakes with similar magnitudes that we saw during injection.”

While the rate of earthquakes declined — there were 23 events a month from 2008 to 2009, but only 1 event a month after May 2010 — the magnitude stayed the same. That indicates the fault doesn't heal completely.

“We don't know why that is,” Ogwari said. “I think that's a question that is out there and may need more research.”

Answering that question, and others, about the complex characteristics and behavior of faults and earthquakes, requires more extensive monitoring than is currently possible given the funding allotted to monitor quakes.

The Fort Worth Basin includes the Barnett shale, a major gas producing geological formation, atop the deep Ellenberger formation used for wastewater storage, which overlays a granite basement layer. The ancient Airport fault system extends through all units.

Friction prevented the fault from slipping for millions of years, but in 2008 high volumes of injected wastewater disturbed the Airport fault. That caused the fault to slip, releasing stored-up energy in waves. The most powerful waves were “felt” as the earth shaking.

“The detailed physical equations relating wastewater processes to fault processes is still a bit of a question,” DeShon said. “But generally the favored hypothesis is that the injected fluid changes the pressure enough to change the ratio of the downward stress to the horizontal stresses, which allows the fault to slip.”?

Earthquakes in North Texas were unheard of until 2008, so when they began to be felt, seismologists scrambled to install monitors. When the quakes died down, the monitoring stations were removed.

“As it stands now, we miss the beginning of the quakes. The monitors are removed when the earthquakes stop being felt,” DeShon said. “But this study tells us that there's more to it than the 'felt' earthquakes. We need to know how the sequences start, and also how they end. If we're ever going to understand what's happening, we need the beginning, the middle — and the end. Not just the middle, after they are felt.”

Monitors the SMU team installed at the DFW Airport were removed when seismic activity appeared to have died down in 2009.

Ogwari hypothesized he could look at historical data from distant monitoring stations still in place to extract information and document the history of the DFW Airport earthquakes.

The distant stations are a part of the U.S. permanent network monitored and maintained by the U.S. Geological Survey. The nearest one is 152 miles, 245 kilometers, away.

Earthquake waveforms, like human fingerprints, are unique. Ogwari used the local station monitoring data to train software to identify DFW earthquakes on the distant stations. Ogwari took each earthquake's digital fingerprint and searched through years of data, cross-correlating waveforms from both the near and regional stations and identified the 412 DFW Airport events.

“The earthquakes are small, less than magnitude three,” DeShon said. “So on the really distant stations it's like searching for a needle in a haystack, sifting them from all the other tiny earthquakes happening all across the United States.”

Each path is unique for every earthquake, and seismologists record each wave's movement up and down, north to south, and east to west. From that Ogwari analyzed the evolution of seismicity on the DFW airport fault over space and time. He was able to look at data from the distant monitors and find seismic activity at the airport as recent as 2015.

“Earthquakes occurring close in space usually have a higher degree of similarity,” Ogwari said. “As the separation distance increases the similarity decreases.”

To understand the stress on the fault, the researchers also modeled the location and timing of the pressure in the pores of the rock as the injected water infiltrated.

For the various earthquake clusters, the researchers found that pore pressure increased along the fault at varying rates, depending on how far the clusters were from the injection well, the rate and timing of injection, and hydraulic permeability of the fault.

The analysis showed pore-pressure changes to the fault from the injection well where the earthquakes started in 2008; at the location of the May 2010 quakes along the fault; and at the northern edge of the seismicity.

Will the DFW Airport fault continue to slip and trigger earthquakes?

“We don't know,” Ogwari said. “We can't tell how long it will continue. SMU and TexNet, the Texas Seismic Network, continue to monitor both the DFW Airport faults and other faults in the Basin.”