Sea-ice extent in the Arctic at a historical low 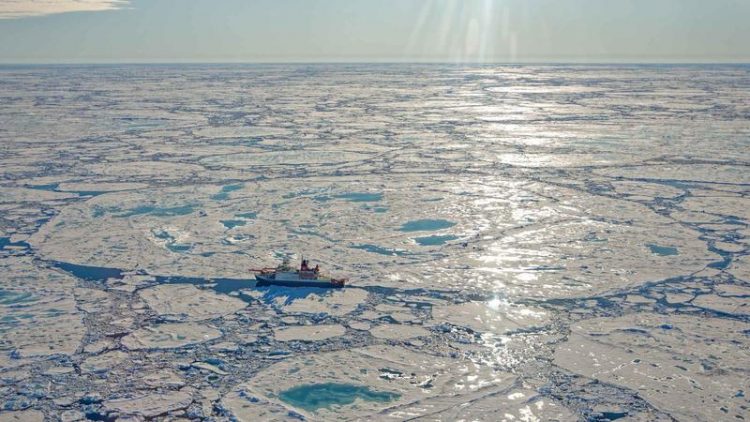 The Arctic sea-ice extent is as low as it has never been for the month of July since the beginning of satellite observation. The sea-ice retreat is especially pronounced off the Siberian coast, as a result of which the Northeast Passage (also referred to as the Northern Sea Route) was ice-free by mid-July.

Virtually from the outset, the year 2020 promised to be an anomalous one in terms of both ice thickness and ice drift. In addition, in June there was a cell of warm air that produced extremely high temperatures in Siberia and seriously impacted the sea-ice cover: in the Russian Arctic (the sector from 30 to 180° East), roughly 1 million square kilometres less of the ocean is covered with ice than in the past seven years.

During the MOSAiC expedition, a number of unusual factors were observed and investigated this winter. These included ice-drift and ice-thickness anomalies, which AWI experts surmised would likely have an effect on the summertime melting; model comparisons have since proven them right.

And now there are a range of further factors that can contribute to the massive sea-ice retreat, the most rapid loss of ice cover ever recorded in the month of July: this year, temperatures on the East Siberian coast were more than 6 °C warmer than the long-term average in May and June.

A cell of warm air over the region dominated the weather in the Arctic, leading to temperatures far above the long-term average. As a result, the snow melted early in the year, and Siberia’s permafrost soils began thawing. In June, this warming also led to intensified sea-ice retreat in the Laptev Sea, a phenomenon that spread to the East Siberian Sea in early July.

By mid-July this had progressed to such an extent that the Northeast Passage was completely open for the first time in 2020. Since the beginning of July, conditions have changed: there is a high-pressure cell over the East Siberian and Chukchi Seas, accompanied by unusually warm temperatures (up to 10 degrees Celsius above average) over the Central Arctic.

The stable atmospheric pressure system over the Arctic helped to strengthen the warm-air cell, which led to intensified melting of the snow cover on the ice, and with it, to an earlier breakup and melting of seasonal ice. Researchers consider areas in which less than 15 percent of the ocean is covered with ice as “ice-free”.

If we take a closer look at the sea-ice extent off Russia’s Arctic coast, in the sector from 30° to 180° East, we can see a historically low level for this region and time of year. “In this sector of the Arctic we’re currently seeing roughly 1.7 million km² of ice cover, which is 1 million km² less ice than the average for the past seven years.

In other words, ca. 40 percent more of the ocean than usual is ice-free,” explains Dr Gunnar Spreen from the Institute of Environmental Physics at the University of Bremen and a member of the Sea Ice Team on the MOSAiC expedition.

For the Arctic as a whole, the current sea-ice extent (6 million km²) is roughly 16 percent below the average for the years 2013 to 2019. It’s still too soon to say whether this trend will continue until the yearly minimum in September, since it is largely dependent on weather conditions.

In terms of how this development could affect the MOSAiC expedition, according to sea-ice physicist Dr Marcel Nicolaus from the Alfred Wegener Institute, Helmholtz Centre for Polar and Marine Research (AWI):

“Introducing so much warmth into the system so early in the year has accelerated the melting of the ice. This has also been worsened by the low albedo at this time of year, when the sun sits high in the sky during the Polar Day, producing an especially pronounced feedback.”

“It should be very interesting when we start analysing our extensive field data. At the moment, we’re closely monitoring how our MOSAiC floe is melting near the marginal ice zone at 79°41’N and 1°51’W. To the best of my knowledge, this is the first time that the melting has been consistently monitored up to the point at which the ice completely disappears,” adds Marcel Nicolaus, who, like Gunnar Spreen, is currently in quarantine in preparation for the last cruise leg of the MOSAiC expedition.

Meanwhile, the Polarstern is currently in Fram Strait between Svalbard and Greenland. Prof Markus Rex, Leader of the MOSAiC Project and an atmospheric physicist at the Alfred Wegener Institute in Potsdam, is currently on board. As he reports: “All the ice around us has long-since broken up or been ground into fragments. But our MOSAiC floe, selected for the expedition back in October 2019, continues to offer an impressively stable basis for our work.

Nevertheless, even this floe will soon end its lifecycle in the marginal ice zone. Today we measured a balmy 14 degrees Celsius 300 m above the floe, and the melting is in full swing. For the last phase of MOSAiC, our focus will be on the freezing phase: the last piece of the puzzle in our observations of the Arctic’s annual cycle. Accordingly, in the last phase we will proceed far to the north, where the freezing will soon begin.”

This will most likely take place in mid-August, once the last resupply and exchange of research staff and crew have been completed.

For further information and the latest data, please go to: https://www.meereisportal.de/en/

meereisportal.de/seaiceportel.de is an initiative of the Helmholtz Climate Initiative (REKLIM) and the Alfred Wegener Institute Helmholtz Centre for Polar and Marine Research (AWI), in cooperation with the University of Bremen (Institute for Environmental Physics).

Its aim is to gather all important and up-to-date information connected to the subject of sea ice. The portal is offering comprehensive background information, processed data and direct access to the data base.

On the MOSAiC expedition, experts from 20 nations will study the Arctic for an entire year. For this purpose, from autumn 2019 to autumn 2020 the German icebreaker Polarstern will drift across the Arctic Ocean, trapped in the sea ice. MOSAiC is being coordinated by the Alfred Wegener Institute, Helmholtz Centre for Polar and Marine Research (AWI).

In order for the unprecedented project to be a success and produce as much valuable data as possible, over 80 scientific institutes are working together in a research consortium. The expedition’s total budget is over 140 million euros.

For the latest news straight from the Arctic, check the MOSAiC channels on Twitter (@MOSAiCArctic) and Instagram (@mosaic_expedition) using the hashtags #MOSAiCexpedition, #Arctic and #icedrift.

For further information on the expedition, visit us at: https://mosaic-expedition.org/

Or you can use the MOSAiC Web App to track Polarstern’s drift route and follow events on-site live: https://follow.mosaic-expedition.org/

Printable images and graphics are available in the online version of this press release: https://www.awi.de/en/about-us/service/press.html

General photos of the MOSAiC expedition are available here: https://multimedia.awi.de/mosaic/

General video footage about MOSAiC can be downloaded here: https://multimedia.awi.de/mosaicvideo/

Hot air: climate researchers at the University of Graz track temperature trends in the atmosphere