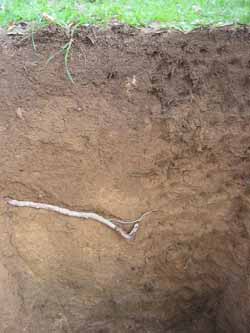 This longstanding mystery is addressed in a review by the University of Zurich’s Michael Schmidt, Susan Trumbore from Max Planck Institute of Biogeochemistry in Jena and an international team of scientists that is published in the October 6 issue of the journal Nature. The researchers suggest ways to improve the ability to predict how soil carbon responds to climate change as well as land use and vegetation change.

For many years, scientists thought that organic matter persists in soil because some of it forms very complex molecular structures that were too difficult for organisms to break down.

In their Nature review, however, Schmidt and colleagues point out how recent advances, from imaging the molecules in soils to experiments that track decomposition of specific compounds, show this view to be mistaken. For example, the major forms of organic matter in soils are in the forms of simple bio-molecules, rather than large macromolecules. Charred residues from fire provide a possible exception, but even these have been shown to decompose.

If molecular structure is not causing organic molecules to persist, what is? The team contends that the average time carbon resides in soil is a property of the interactions between organic matter and the surrounding soil ecosystem. Factors like physical isolation, recycling, or protection of molecules by minerals or physical structures like aggregates, or even unfavorable local temperature or moisture conditions, can all play a role in reducing the probability that a given molecule will decompose.

Although soils are teeming with bacteria (there are approximately 40 million cells in a gram of soil), they typically occupy less than 1% of the available volume, and are usually clustered in ‘hot spots’. In some situations where microbial populations are sparse, for example in deep soils or far from roots, it may just require a long time for suitable conditions to arise that allow a molecule to be broken down. In other locations, freezing temperatures may inhibit microbial action.

Why is this important? Currently, models we use to predict how global soil carbon will respond to cli-mate change include little mechanistic understanding and instead use simple factors like temperature dependence that indicate acceleration of decomposition in a warmer world. This assumes that temperature is the major limitation to decomposition, whereas other factors may dominate.

The decomposition-warming feedback predicts large soil carbon losses and an amplification of global warming, but in fact the authors argue this approach is too simplistic. In the Nature review, the scientists make several suggestions where current improvements in understanding could be built into models, improving our ability to predict how soil carbon responds not only to climate but to land use or vegetation change. (ST)