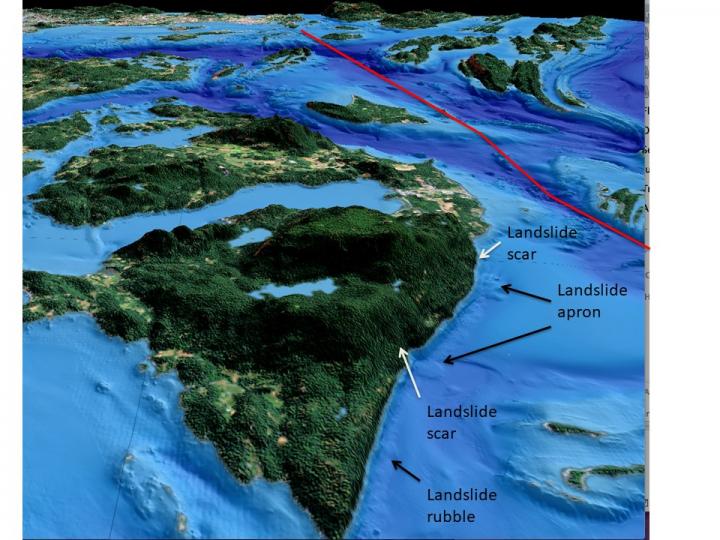 These tsunamis might be directed toward the islands of San Juan Archipelago, Vancouver Island and low coastal areas of the United States including Bellingham, Washington.

Extensive seismic mapping of the seafloor by Canadian and U.S. scientists has revealed details of the extent and surrounding features of the Devils Mountain Fault Zone running south of the Archipelago, as well as the newly mapped Skipjack Island Fault Zone at its northern edge, said H. Gary Greene of Moss Landing Marine Laboratories. Both of the faults extend more than 55 kilometers (~34 miles) offshore, but might have the potential to rupture over 125 kilometers (~78 miles) if connected to onshore faults.

The faults are similar to the east-west trending faults under the cities of Seattle and Tacoma, lying in the brittle upper plate of the Cascadia Subduction Zone. Deformation of sediments along the Devils Mountain and Skipjack faults indicates that they were active at least 10,000 years ago, Greene said.

Although there have not been any large recorded earthquakes along these faults, he said the similar Seattle and Tacoma fault zones have produced magnitude 6 to 7 earthquakes in the past.

The new seafloor mapping holds a few troubling signs for what might happen if an earthquake of that magnitude does occur along the Skipjack Island fault, in particular. For instance, Greene and his colleagues have identified an underwater rubble field from a past landslide along the steep northeastern face of Orcas Island near the Skipjack fault. A Skipjack earthquake could shake loose the massive rubble blocks here, he said, “and generate an impact tsunami from this material.”

The researchers also saw evidence of previous ground failure–slumps and slides of sediment–along the southern edge of the Canadian Fraser River Delta, which lies just north of the Skipjack Island fault zone. If an earthquake led to a massive slide of river delta sediments, the resulting tsunami might affect both the islands of the San Juan Archipelago and the Washington state coast.

Greene also noted that the sediments lining Bellingham Bay have “just a tremendous amount of pockmarks, which indicate that methane is seeping out of the seafloor and has in the past.” The gas might further destabilize sediment in the region.

Together, the faults and seafloor features suggest that seismologists should keep a close eye on the potential local tsunami risks in the central Salish Sea. “We have the two faults here, we know that they have moved fairly recently, and that they are in the upper plate of the Cascadia Subduction Zone, an unstable area that we know can fail,” Greene said.

Although Greene, Vaughn Barrie of the Geological Survey of Canada, and other colleagues have identified some of the potential causes of tsunami between the Devils Mountain and Skipjack Fault Zones, the next step would be to model in detail how the tsunami might occur. “Modeling could help us establish the volume of the material that would fail, and that would give us a better idea of the potential magnitude of the tsunami,” he said.