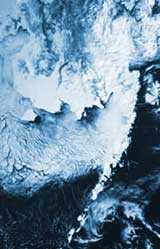 The last ice-age was interrupted by numerous bouts of warmth. <br>© Photodisc

Natural randomness in the world’s climate system may have caused the frequent, fast and fleeting returns to warm conditions during past ice ages, say two German scientists1.

Andrey Ganopolski and Stefan Rahmstorf at the Potsdam Institute for Climate Impact Research think that the flickering character of ice-age climate is a signature of stochastic resonance. This is the counter-intuitive phenomenon where noise amplifies the effect a weak signal has on its surroundings.

Global climate during the past 10,000 years – since the last ice age ended – has remained relatively stable. Conversely, the ice age itself was interrupted by numerous warm episodes of a few hundred years each.

Some of these, called Heinrich events, are thought to have resulted from surges of the great ice sheet that covered much of North America. Others, called Dansgaard-Oeschger (D/O) events, were, till now, a mystery.

During D/O events, temperatures in the North Atlantic region typically rose by 5 to 10 ÂºC in just a few decades before sinking again over the ensuing centuries. Last year, Richard Alley of Pennsylvania State University and co-workers showed that the time between successive D/O events is often about 1,500, 3,000 or 4,500 years2.

The researchers suggested that the events were caused by some kind of periodic influence on climate that repeated every 1,500 years. They also proposed that the mechanism of D/O events might involve stochastic resonance.

Normally a signal, such as a radio transmission, is hindered by random variations – radio static, say, or noise. But in some circumstances a little noise can actually enhance the signal. This usually happens in a system that flips to a new state when a signal exceeds a certain threshold. Such systems are said to exhibit stochastic resonance.

Stochastic resonance was first invoked in 1982 in an attempt to explain why ice ages often recur every 100,000 years. Although that idea was later found wanting, stochastic resonance was subsequently discovered in a host of other situations. Living organisms use it to detect weak signals in a noisy environment.

Ganopolski and Rahmstorf have now discovered a way in which stochastic resonance may have generated D/O events every 1,500 years, or multiples thereof. They have developed a sophisticated computer model of the global climate system that takes into account the movements of the atmosphere and oceans. The model suggests that during ice ages there are two ways for water to circulate in the North Atlantic Ocean.

In the usual ’cold’ state, ocean currents carry relatively warm Atlantic water north until it sinks south of Greenland and returns towards the Equator in a bottom current. This state is prone to switching to another, temporary, state. Here, warm ocean surface waters travel even further north, into the Nordic Sea, before sinking. This brings warmer temperatures to the high-latitude North Atlantic region.

By forcing their model with a periodic signal that alters the ocean salt content every 1,500 years, the researchers mimic the typical pattern of ice-age D/O events – but only if there is also some random noise in the system.

There is evidence of a 1,500-year periodic forcing in many climate records. It is widely suspected to originate from repetitive changes in the activity of the Sun. By itself, this influence would not have induced the profound shifts in ice-age climate; but stochastic resonance could have enabled the weak signal to imprint itself on the ocean circulation.