Discovery of a new natural factor in desertification: Micro-organisms in salt lakes 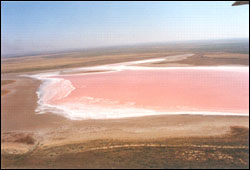 Salt lakes have a greater impact on climate change than was previously understood. This has been established by scientists from the UFZ Centre for Environmental Research (Umweltforschungszentrum Leipzig-Halle) together with colleagues from Austria, Russia and South Africa. They found evidence that bacteria in salt lakes produce substances which act as greenhouse gases and destroy the ozone layer. These substances are known as volatile halogenated hydrocarbons (VHHs). These spread world-wide through the atmosphere and also damage vegetation.

Scientists previously assumed that VHHs were produced almost exclusively through industrial processes. However, when the pollutant flows in southern Russia were analysed, it was found that there must be natural sources in addition to the industrial ones. This was indicated by increased concentrations of VHH degradation products, which were recorded by scientists in Antarctic ice some years ago. The ice examined was over 250 years old and dates from the pre-industrial age. A search for natural sources of VHHs by an international research group led by Dr Ludwig Weißflog of the UFZ succeeded for the first time in finding evidence of some of these compounds being formed naturally by salt-loving micro-organisms in salt lakes.

The organisms responsible for these processes are among the oldest and hardiest life forms found on earth. The bacteria can easily survive fluctuations in temperature between -25ºC and +35ºC and cannot be destroyed by vacuum or ultraviolet radiation. The crucial factor for the survival of these bacteria is the concentration of salt and water in their environment. If the salt content of the solution is heavily diluted the micro-organisms die.

How do these pollutants affect vegetation?

Within a few days these air pollutants spread throughout the world through the atmosphere. They accumulate in plants and damage them from the inside by blocking the closing mechanism of the stomata in the leaves. This means that a greater quantity of water evaporates, the plant then requires more water and, in extreme cases, will die of thirst. Although VHHs have already been entering the atmosphere from salt lakes for a long time, their damaging effect is amplified by predicted climate change.

Arid areas are particularly affected, because vegetation in these regions reacts more sensitively to air pollutants. Ultimately, soil erosion increases and salt lakes and arid areas expand. Already the southern Russian desert is increasing by 500 square kilometres every year. Climate predictions suggest that the Eurasian steppe belt between Austria and China will continue to grow. Even parts of Brandenburg, Saxony-Anhalt and Saxony must expect increasing aridity in the future. In the last 50 years alone precipitation in northern Saxony in the summer months has declined by up to 25 per cent. The changing climate will mean that the effects of the pollutants already present in the atmosphere will be intensified and thus accelerate the climate-changing processes. Knowledge about the behaviour of environmental pollutants in changed climate conditions is of great importance, in order for strategies to be developed to contain the impacts of climate change.

The research in the salt lakes of the Kalmykian Steppe (southern Russia) and in the Kalahari Desert (South Africa) were supported by the EU, the German and South African research ministries and the Russian Government. The results of the research contribute to the practical implementation of the UN Convention to Combat Desertification.