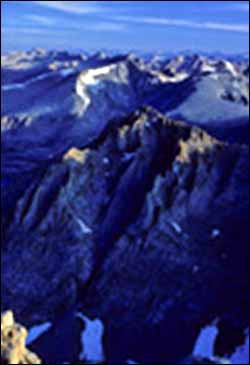 Sunrise illuminates the crest of the Sierra Nevada north of Mt. Whitney. These peaks owe their elevation to removal of weighty material from the base of the Sierra, material now seen descending into the mantle. Photo courtesy Craig Jones, CU-Boulder

A new study of California’s southern Sierra Nevada range by a University of Colorado at Boulder research team has located a massive body of rock that sank into Earth’s mantle some 3.5 million years ago, allowing the mountains to pop up.

Undertaken with a high-tech suite of instruments designed to probe the geology to roughly 125 miles below Earth’s surface, the study illustrated the mountain building process in the southern Sierras with unprecedented detail.

The study explains how the southern Sierra mountains rose when a body of underlying dense rock sank down and away from the base of the 35-kilometer-deep crust. Authored by CU-Boulder doctoral student Oliver Boyd and CU-Boulder geological sciences Associate Professors Craig Jones and Anne Sheehan, the paper appeared in the July 30 issue of Science.

“Our measurements show how material at the bottom of the Sierran crust descended into the mantle, which seems to confirm that the mountain range popped up as the weight on the crust dropped off,” said Jones. “Seeing this helps us understand just how the geologic processes are operating.”

The study area extends north from Bakersfield, Calif., to just south of Yosemite National Park near Mammoth Lakes and east from Fresno to the western flank of Death Valley National Monument. The area covers both the valley and mountain range and includes Kings Canyon and Sequoia National Parks and California’s highest peak, 14,494-foot Mt. Whitney.

The researchers used 24 broadband seismometers to record scores of distant earthquakes in different wavelengths of the spectrum to create an underground image of the Sierras, Boyd said. “This is the first time such images have been processed using these different techniques,” he said.

The research team likened the measurements to combining X-rays from a CAT scan with the magnetic properties of an MRI and two types of sound waves from a sonogram to separate different rock types in the crust and mantle.

“By combining all these techniques, we were able to determine the mineralogy of the anomalies we found,” Sheehan said. “This is the first time this study area has been imaged with this kind of clarity.”

The mineralogy, as well as the processes that moved the rocks around, is very complex, Boyd said. In simple terms, the crust’s garnet-rich rock known as eclogite — which acted like a ship’s ballast — broke away and began to sink into the mantle roughly three million to four million years ago.

The eclogite eventually was replaced by hot, young and mobile mantle rock called spinel peridotite, essentially allowing the Sierras to rise, said Jones. “This process is thought to have occurred elsewhere in the world many times, but this is the first time it has been imaged with this level of confidence.”

The CU-Boulder team used four data sets to create underground images of the region deep under the Sierras, including P-waves, two orientations of S-waves and attenuation. P-waves are measurements of the speed of sound, S-waves — which are like ripples traveling down a jump rope — are used to measure the speed of shear waves and attenuation is used much like X-rays, Boyd said.

Five CU-Boulder undergraduates helped collect data for the project in recent years using the seismometers scattered across the study area.

“Our work builds on a shift in thinking about how these mountains formed,” Jones said. “For a long time, the Sierras were thought to be geologically ’boring,’ so there’s quite a huge shift underway in our understanding of these mountains.”

The findings are another step in an ongoing, 15-year study of the southern Sierras, Jones said. The new results tie in to the overall topography of California and the western United States and provide insight into continental deformation that isn’t simply explained by plate tectonics.