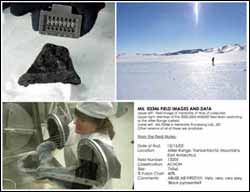 While rovers and orbiting spacecraft scour Mars searching for clues to its past, researchers have uncovered another piece of the red planet in the most inhospitable place on Earth — Antarctica.

The new specimen was found by a field party from the U.S. Antarctic Search for Meteorites program (ANSMET) on Dec. 15, 2003, on an ice field in the Miller Range of the Transantarctic Mountains, roughly 750 kilometers from the South Pole. This 715.2-gram black rock, officially designated MIL 03346, was one of 1,358 meteorites collected by ANSMET during the 2003-2004 austral summer.

Discovery of this meteorite occurred during the second full field season of a cooperative effort funded by the National Aeronautics and Space Administration (NASA) and supported by the National Science Foundation (NSF) to enhance recovery of rare meteorite types in Antarctica in the hopes of finding new Martian samples.

Scientists at the Smithsonian Institution’s National Museum of Natural History involved in classification of Antarctic finds said the mineralogy, texture and the oxidized nature of the rock are unmistakably Martian. The new specimen is the seventh recognized member of a group of Martian meteorites called the nakhlites, named after the first known specimen that fell in Nakhla, Egypt, in 1911.

Like the other Martian meteorites, MIL 03346 is a piece of the red planet that can be studied in detail in the laboratory, providing a critical “reality check” for use in interpreting the wealth of images and data being returned by the spacecraft currently exploring Mars. Following the existing protocols of the U.S. Antarctic meteorite program, scientists from around the world will be invited to request samples of the new specimen for their own detailed research.

Nakhlites are significant among the known Martian meteorites for several reasons. Thought to have originated within thick lava flows that crystallized on Mars approximately 1.3 billion years ago, and sent to Earth by a meteorite impact about 11 million years ago, the nakhlites are among the older known Martian meteorites. As a result they bear witness to significant segments of the volcanic and environmental history of Mars.