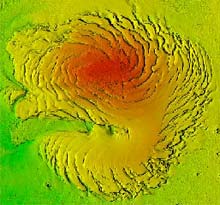 A shaded-relief image of the ice cap on Mars’ North Pole. Courtesy of Jon Pelletier, UA.

The spiral troughs of Mars’ polar ice caps have been called the most enigmatic landforms in the solar system. The deep canyons spiraling out from Red Planet’s North and South poles cover hundreds of miles. No other planet has such structures.

A new model of trough formation suggests that heating and cooling alone are sufficient to form the unusual patterns. Previous explanations had focused on alternate melting and refreezing cycles but also required wind or shifting ice caps.

His report, “How do spiral troughs form on Mars?,” is published in the April issue of the journal Geology. One of his computer simulations of the troughs graces the cover.

How the icy canyons formed in a spiral has puzzled scientists since the pattern was first spotted by the Viking spacecraft in 1976.

Pelletier, a geomorphologist who studies landforms on Earth such as sand dunes and river channels, has a fondness for natural patterns that are regularly spaced.

Spirals fit the bill, and while perusing a book on mathematical patterns in biology, he was struck by the spiral shape formed by slime molds. He wondered whether the mathematical equation that described how the slime mold grew could also be applied to geological processes.

“There’s a recipe for getting spirals to form,” he said. So he tried it out, using information that described the situation on Mars.

Temperatures on Mars are below freezing most of the year. During very brief periods during the summer, temperatures on the polar ice caps get just high enough to let the ice melt a bit, Pelletier said.

He proposes that during that time, cracks or nicks in the ice’s surface that present a steep side toward the sun might melt a bit, deepening and widening the crack. Heat from the sun also diffuses through the ice.

Much as ice cubes evaporate inside a freezer, on Mars, the melting ice vaporizes rather than becoming liquid water.

The water vapor, when it hits the cold, shady side of the little canyon, condenses and refreezes. So the canyon expands and deepens because one side is heated occasionally while the other side always remains cold.

“The ambient temperatures on Mars are just right to create this form. And that’s not true anywhere else in the solar system,” he said. “The spirals are created because melting is focused in a particular place.”

Pelletier said the differential melting and refreezing is the key to the formation of Mars’ spiral troughs.

So he put mathematical descriptions of the heating and cooling cycles into the spiral-generating equation and ran computer simulations to predict what would occur over thousands of such cycles. He did not include wind or movement of polar ice caps in his model.

The computer made patterns that match what’s seen on Mars, even down to the imperfections in the spirals.

“The model I have predicts the spacing between these things, how they’re curved, and how they evolve over time to create spiral feature,” he said.

“A lot of planetary sciences is about making educated guesses about the imagery that we see. We can’t go there, we can’t do do field experiments,” he said. “The development of numerical models provides strong suggestions as to what’s essential to create the form that we see,” and allows scientists to test their assumptions, he said.