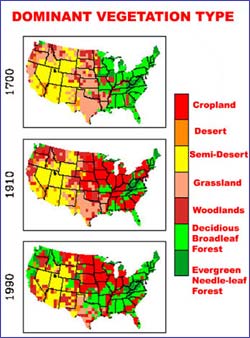 Changes in Vegetation across the United States <br> <br>These images show the (a) dominant vegetation type and (b) fractional areal coverage (%) of each grid cell by the dominant vegetation for the 1700, 1910, and 1990 vegetation cases. <br> <br>The maps labeled 1700 are estimates of potential vegetation for the country under current climate conditions (i.e., without land use). Maps labeled 1910 and 1990 are estimates of land cover for those periods that include the effects of land-use history up to and including those years respectively. <br> <br>These figures illustrate some of the large changes to the land cover patterns that are estimated to have occurred across the United States as the result of land-use activities. It can be seen that between 1700 and 1910, much of the U.S. was converted from forests to croplands. By 1910, forest cover over the United States was at or near its lowest point in 300 years. Since 1910, agriculture has substantially intensified in the central and western U.S., but decreased in the east. By 1990, croplands covered about 24 percent of the total land area, with farms occupying more than 90 percent of some regions in Iowa and eastern Nebraska. Forest cover has steadily increased, to near 40 percent of the total land area in 1990. CREDIT: Somnath Baidya Roy, Princeton University

While climate may be impacted by carbon dioxide emissions, aerosols and other factors, a new study offers further evidence land surface changes may also play a significant role.

The study of summer climate in the United States reported changes in land cover, particularly vegetation, have impacted regional temperatures and precipitation. The study used data and computer models from NASA and other organizations such as the National Oceanic and Atmospheric Administration (NOAA).

“The largest human impacts on nature have occurred since the Industrial Revolution,” said Somnath Baidya Roy, a research scientist at Princeton University, N.J. Roy is lead author of the study published in a recent issue of the Journal of Geophysical Research-Atmospheres. Co-authors included George Hurtt, University of New Hampshire; Christopher Weaver, Rutgers University; and Stephen Pacala also from of Princeton.

Previous studies simulated and compared past and present climates with current and potential vegetation. This research used the NASA-funded Ecosystem Demography computer model to trace the evolution of vegetation distribution patterns over the U.S. for nearly 300 years. “The model is truly a technological breakthrough and enables scientists to study the potential impact of land use and climate change across a wide range of scales, from individual plants to continental regions,” Hurtt said.

The researchers found land cover changes produced a significant cooling effect of more than one degree Fahrenheit in parts of the Great Plains and Midwest as agriculture expanded and replaced grasslands. Farmlands tend to create lower temperatures through increased evaporation. A warming effect was found along the Atlantic coast where croplands replaced forests.

Compared to forests, croplands are less efficient in transpiration; a daytime process where water evaporates from leaves during photosynthesis and cools the air. A slight warming effect was also observed across the Southwest, where woodlands replaced some deserts.

The study found land cover changes could impact local precipitation, but not as significantly as they affect temperature. The relatively strong cooling over the central U.S. has probably weakened the temperature difference between land and the Gulf of Mexico, slowing the northern movement of weather systems and resulting in enhanced rainfall across Texas. Consequently, the air masses reaching the Central Lowlands region, including Illinois and Indiana, are drier, causing rainfall reductions.

“Land cover change is not uniform. Most people associate land cover change with deforestation, but the changes in the U.S. are more complex, creating a temperature signal that is more difficult to study,” Roy said. The forest cover in the U.S. has actually increased in the last 100 years mainly due to farm abandonment in the East, fire suppression in the West, and large parts of the Great Plains have been converted into irrigated croplands, which tends to produce cooling.

The research also carries additional implications. “It is important to understand the effects of changing land cover, because it can mitigate or exacerbate greenhouse warming,” Roy said. “In the U.S. over the past 100 years, it seems to be offsetting greenhouse warming. The opposite is probably true in most other parts of the world. This finding has also been supported in previous research,” Roy said.