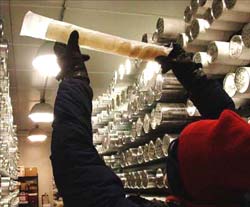 Human activity in the Industrial Age – approximately the last 150 years – has significantly increased atmospheric levels of methyl bromide, a gas known for harming the ozone layer in the Earth’s stratosphere.

A research team led by UC Irvine scientist Eric Saltzman reached this conclusion after examining an ice core recovered from Antarctica. By studying air bubbles trapped in the core, Saltzman’s team was able to compare levels of methyl bromide in the atmosphere over the last three centuries. The team concluded that during the industrial era, the amount of global atmospheric methyl bromide in Southern Hemisphere air appears to have increased by 3.5 parts per trillion, or approximately 50 percent of the preindustrial level of the gas.

The researchers report their findings in the March 2, 2004, issue of the Journal of Geophysical Research – Atmospheres.

In the study, the researchers utilized 23 samples of shallow ice core drilled in 1995 in Siple Dome, West Antarctica, as part of a National Science Foundation-sponsored ice coring project in the West Antarctic ice sheet. Air was extracted from the samples in Saltzman’s laboratory at UCI and analyzed using gas chromatography/mass spectrometry, a powerful analytical technique.

Previous records of methyl bromide in the atmosphere – a compilation of instrumental records and firn air measurements – had only extended back to about the year 1900. (Firn is rounded, well-bonded snow that is older than one year.)

The researchers also developed a numerical model to simulate major processes involved in the global biogeochemical cycle of methyl bromide. Both the ice core measurements and modeling results show that human activities such as fumigation, combustion and biomass burning in industrial times have significantly increased atmospheric levels of this gas. “They also highlight the large uncertainty still remaining in our understanding of the modern atmospheric methyl bromide budget,” Saltzman said.

Methyl bromide is a fumigant used to control insects, nematodes, weeds and pathogens in crops, forests and wood products. Its primary uses are for soil fumigation, postharvest protection and quarantine treatments. The gas also has natural sources in both terrestrial and oceanic environments, as well as natural “sinks” that can remove methyl bromide from the atmosphere. It is the only chemical included in the Montreal Protocol – the international agreement designed to protect the Earth’s stratospheric ozone layer – that has major natural sources. Understanding the natural sources and sinks of methyl bromide is a focus of current research, as is gaining a greater understanding of other gases harming the ozone layer, which protects the Earth from ultraviolet radiation.