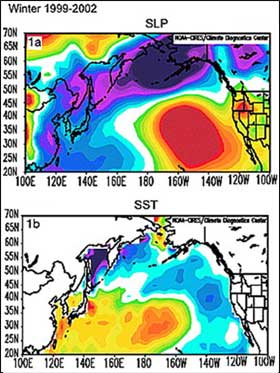 UNUSUAL SEA LEVEL PRESSURE AND SURFACE TEMPERATURES <br> <br>Depicted are averages of sea level pressures (left) and sea surface temperatures (right) during the winters of 1999-2002. In the left image, the North Pacific Ocean was subject to unusually low sea level pressure (blue) in the Bering Sea and anomalously high sea level pressure north of Hawaii (yellow/red). In the right-hand image, there were cooler (blue) than normal sea surface temperatures (SSTs) along the U.S. west coast, and warmer (yellow/orange) than normal SSTs in the coastal Gulf of Alaska. CREDIT: NOAA/NCEP, Univ. of Washington

Using satellite and other data, scientists have discovered that sea surface temperatures and sea level pressure in the North Pacific have undergone unusual changes over the last five years. These changes to the North Pacific Ocean climate system are different from those that dominated for the past 50-80 years, which has led scientists to conclude that there is more than one key to the climate of that region than previously thought.

According to a study by Nicholas Bond, J.E. Overland and P. Stabeno of the National Oceanic and Atmospheric Administration (NOAA) Pacific Marine Environmental Laboratory, and M. Spillane of the University of Washington, during the last four winters from 1999-2002 (ranging from November to March) sea surface temperatures were cooler than normal along the U.S. west coast and warmer than normal in the coastal Gulf of Alaska. These conditions differ from those of the Pacific Decadal Oscillation (PDO), thought to be the primary key that causes the climate of the North Pacific to change. As a result, the scientists believe that the conditions that have occurred since 1999 are independent of the PDO.

The Pacific Decadal Oscillation is a basin-wide oceanic pattern similar to El Niño and La Niña but much larger. It lasts a couple of decades rather than a year or less like El Niño and La Niña. According to Bond, the unusual levels of pressure and temperature seen in the last five years are a departure from the pattern seen in the PDO, which represented the principal mode of long-term climate variability in the North Pacific for the 20th century. These results show that a single index such as the PDO is incomplete for characterizing the state of the North Pacific climate system.

“Looking back over the past century, categorizing the climate signals as a pure PDO pattern would be simple-minded,” said Bill Patzert, Oceanographer and Climatologist at NASA’s Jet Propulsion Laboratory, Pasadena, Calif. “This research shows that although there are some characteristics of a PDO, there are some disturbances in the ’PDO force,’ as the study showed using sea surface temperature and sea level pressure, Patzert noted. A good example is that some areas of North America are responding in a PDO-like response, and other places like Western Canada and Alaska are not experiencing cooler air temperatures expected from a simple PDO shift.

Patzert praised his colleagues and noted that the lesson is that these climate patterns are constantly shifting, so Bond and Stabeno have reminded scientists that the decadal shifts in climate are not clean and simple.

The change throughout the last five years in the North Pacific climate may also be having considerable impacts on the marine ecosystem. For example, during the recent period, ocean conditions were favorable to salmon and allowed them to return in greater numbers and reproduce more. In a classic PDO scenario, the salmon fisheries would collapse in Alaska and boom in Pacific Northwest, but they’re booming in both places.

“The best sea surface temperature data we get are from satellites. We couldn’t do this kind of research with ships and buoys, because they just don’t have that kind of coverage,” Bond said. “The bottom line is not to take your “satellite” eye off the climate system, because it’s very changeable,” Patzert said.

Bond used NOAA’s National Center for Environmental Prediction analysis of sea surface temperatures. Those temperatures are derived from the Polar Operational Environmental Satellite system, of which NASA’s Goddard Space Flight Center is responsible for their construction, integration, and launch.

This research was supported by NASA, NOAA, and the National Science Foundation. NASA’s Earth Science Enterprise mission is to develop a scientific understanding of the Earth system and its response to natural or human-induced changes to enable improved prediction capability for climate, weather, and natural hazards. Part of NOAA’s mission is to describe and predict changes in the Earth’s environment.

The study appears in a recent issue of Geophysical Research Letters.