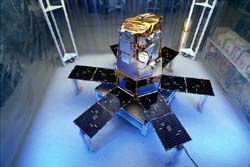 SORCE SPACECRAFT <br> <br>SORCE maintains a 24-year legacy of solar output monitoring that should help explain and predict the effect of the Sun on the Earth’s atmosphere and climate. Credit: NASA / LASP

In fall 2003, SORCE was fortunate to see and measure exceptionally high levels of the sun’s activities. In late October and November the sun sent solar flares and coronal mass ejections hurtling Earthward, disrupting satellites and other transmissions, triggering an intense geomagnetic storm, and enabling sightings of the northern lights as far south as Arkansas, Texas and Oklahoma.

The third most powerful solar flare ever observed in X-rays, high-energy photons with very short wavelengths, erupted from Sunspot 486 October 28, 2003, at approximately 6 a.m. Eastern Standard Time. The same spot released a large X11 flare on the afternoon of October 29. As the sunspot moved across the face of the sun, total solar brightness decreased by 0.3 percent.

SORCE tracked the decreases in Total Solar Irradiance (TSI) and the increases in X-rays, as well as changes in the other parts of the solar spectrum. SORCE’s suite of instruments measures solar brightness in soft X-ray bands and at wavelengths from ultraviolet through the visible and near-infrared spectrum. This is the most comprehensive dataset ever collected of the complex brightness changes that occur in the solar spectrum during a major eruptive event.

Having accurate knowledge of the sun’s brightness variations on all time scales, from flares to centuries, at all wavelengths heating the Earth’s atmosphere, land and oceans is essential to understand, model and predict impacts of the sun on Earth.

Two of the SORCE instruments, the Total Irradiance Monitor (TIM) and the Spectral Irradiance Monitor (SIM), will ultimately be part of the operational measurements made by the National Polar-orbiting Operational Environmental Satellite System (NPOESS) satellites beginning in 2013. Solar irradiance has been monitored since the 1970s to create a long-term record for study by researchers.

“The spacecraft and instruments have all been performing beautifully since launch, and the new solar data exceed all of our expectations,” said Gary Rottman, SORCE Principal Investigator at University of Colorado’s Laboratory for Atmospheric and Space Physics (LASP) in Boulder, Colorado. “The sun also cooperated by putting on an unusual display of intense activity in late October that provided some of the largest sunspots ever recorded and produced major flares surpassing all previous observations. These unexpected phenomena will help us better understand how the sun functions and how it influences the terrestrial environment.”

“For the very first time we have observations capable of characterizing simultaneously the variations in the total solar irradiance and in the visible and near infrared part of the solar electromagnetic spectrum that provides the primary energy to the Earth’s surface,” said Dr. Judith Lean, Research Physicist at the Naval Research Laboratories and a member of the National Academy of Sciences. “Simple models exist of solar spectrum variability, which general circulation models use to simulate climate response to solar forcing. SORCE data already indicate the models need to be revised at infrared wavelengths; they promise unprecedented new understanding of the mechanisms of solar spectral-irradiance variability and their possible climatic impacts.”

SORCE is a joint partnership between NASA and LASP. As a principal investigator-led mission, NASA provided management oversight and engineering support. Scientists and engineers at the University of Colorado designed, built, calibrated and tested the four science instruments on the satellite. The Mission Operations Center and the Science Operations Center are both located at the University.