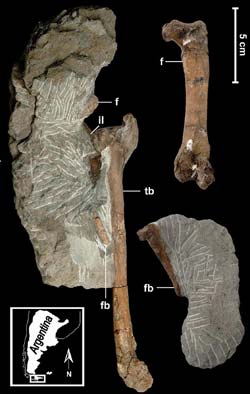 That’s the conclusion of Dr. Julia A. Clarke, assistant professor of marine, earth and atmospheric sciences at North Carolina State University, and her colleagues from Argentina, who published their findings in the December 2003 issue of the journal Novitates of the American Museum of Natural History (AMNH).

According to Clarke, the specimen consists of parts of a pelvic girdle and a leg and dates to the Eocene epoch of Earth’s history – about 40 million years ago – sometimes called the “early age of mammals.” Found at Punta Torcida on Tierra del Fuego’s Atlantic coast, the fossilized bones are sufficiently different from known penguin anatomy to rewrite the story of penguin evolution.

Tierra del Fuego, the southernmost portion of the South American continent, means “land of fire” in English. Argentinean geologist Eduardo B. Olivero’s team discovered the fossils in 1999, and Olivero asked Clarke to help identify the bones.

“This early part of the penguin lineage must have arrived in South America during a comparatively warm period in Earth’s history,” said Clarke, “coincident with the beginning of, or just before, a major global cooling trend that occurred in the mid-Eocene. All other penguin fossils date to long after that ‘icehouse’ phase began and after the Antarctic icecap is inferred present.”

The new find may tell a radically different story from previous discoveries about penguins and their prehistoric travels. Despite the popular association of penguins with cold polar regions, said Clarke, species of the birds live near the equators as well. The earliest penguins, then, might have developed in warmer climates, and slowly adapted as their habitats grew icier.

The scientists found portions of a pelvis, a nearly complete right femur, a fragment of the left femur and other bones. Details of the bones, and a careful comparison of them to both fossil and modern penguin bones, allowed them to unravel the evolutionary relationships of the new fossil.

Clarke says that a larger, more comprehensive study of the penguin family tree is necessary before the full story of early penguins in the Land of Fire can be told. But she’s confident that the discovery will help clarify the timing and pattern of penguin diversification.

“This is the first vertebrate from that distant epoch ever found in Tierra del Fuego,” she says. “As modest as these fossilized bones are, they’ll tell us a great deal about the morphological evolution of penguins and the travels of these birds some 40 million years ago on a very different planet Earth.”