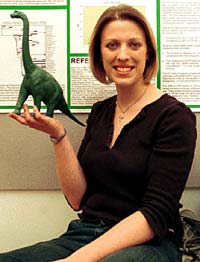 Julia Heathcote, graduate student in earth and planetary sciences in Arts & Sciences, holds a dinosaur model in a McDonnell building laboratory. Heathcote has done an inventory of the complete dinosaur fossil record to determine the quality and congruence of the record. She calls the record, known as the Dinosauria, "moderately good," and says her results indicate that there might be 500 or more dinosaurs yet to be discovered. <br>David Kilper/WUSTL Photo

500 or more dinosaurs possible yet to be discovered

A graduate student in earth and planetary sciences in Arts & Sciences at Washington University in St. Louis has combed the dinosaur fossil record from T. Rex to songbirds and has compiled the first quantitative analysis of the quality and congruence of that record.

Heathcote found that existing data is between one-half and two-thirds complete, or of high quality, for dinosaur data. As template, she used two published whole dinosaur studies and compared them with smaller family trees within the context of the whole dinosaur data, commonly known as the Dinosauria. She also analyzed for congruence – the correlation between the fossil record and family tree relationships.

Heathcote found some of the clades both complete and congruent, while others are poor in both ways.

“The whole Dinosauria fossil record I would say is moderately good, which was a surprise, because I thought it would be much worse,” Heathcote said. “It generally shows a low degree of completeness but a high degree of congruence with the existing phylogenies, or family trees, studied.”

Her results are important for paleontologists who are especially focused on the evolution of dinosaurs. It is to the paleontologist what Beckett’s Baseball Card Price guide is to the baseball card collector, and more — Heathcote’s analysis provides information on the relationships between classes and groups, whereas the Beckett guide draws no lineages for players, for instance.

Heathcote said that there have been many attempts to analyze evolutionary patterns using the fossil record, but that the patterns can only be interpreted usefully in the context of stratigraphy — essentially how old the fossils are. It’s important to know the quality of the fossil record to better assess whether an apparently large number of genera at any one time – say, the late Jurassic period – is due to genuine species diversity or just exceptionally good preservation. Congruence matters, too, to provide information on the adequacy of data and confidence to construct evolutionary relationships.

Heathcote presented her results at the annual meeting of the Geological Society of America, held Nov. 2-5, 2003, in Seattle.

Heathcote used three different calculations to achieve her results: the Stratigraphic Consistency Index, the Relative Completeness Index and the Gap Excess Ratio. The first is a measure of how well the relationships that have been proposed for dinosaurs fit in with the stratigraphic data, which contributes to a timeline for evolution. The Relative Completeness Index measures the percentage of how much missing data there might be to how much researchers actually have. And the Gap Excess Ratio measures how much missing data there actually is to the minimum missing data possible if the genera were arranged in the family tree in order of age.

Heathcote said that the known number of dinosaurs now stands at slightly more than 250. But because her results give a maximum possible completeness value, there might be 500 or more yet to be discovered, and she hopes that with each discovery, the researchers will enter their data into her program so that all paleontologists can benefit by seeing how the new discovery relates to previous ones.

She called the work “a new tool that draws together all of the data of the past 150 years, all plotted out accurately for the first time. You can see how far back these dinosaurs go, see their relationships with each other.”