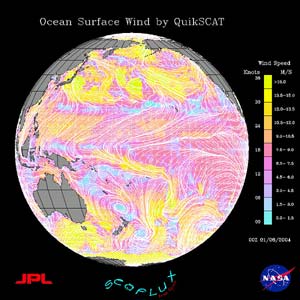 WIND DATA FROM QUIKSCAT <br>This is a QuikSCAT image of winds on the surface of the Pacific Ocean on January 8, 2004. Credit: NASA JPL

Freighters, cruise lines, marine rescuers and coastal managers are among those who could benefit from prototype three-dimensional, three-day ocean condition forecasts created with the assistance of NASA satellite data, computer models and on-site ocean measurements.

Scientists hope to forecast ocean conditions several days ahead, much like regional weather forecasts broadcast on television news. “It’s a three-dimensional look at the ocean, from the surface to the ocean bottom,” said Yi Chao of NASA’s Jet Propulsion Laboratory (JPL), Pasadena, Calif., lead scientist on the project. Chao and three colleagues presented their real-time operational forecast system for the Central California Ocean at the recent Annual Meeting of the American Meteorological Society (AMS).

The end product from our 3-D ocean model includes temperature, salinity and current,” Chao said. These are available as text or binary data, or can be visualized for further analysis. Seeing the ocean in three dimensions, and knowing how it will behave from top to bottom, will save fuel costs for large shippers by steering away from choppy waters, or moving with the current. The data will also help Coast Guard rescuers, as they would be able to determine which direction people stranded in the water would drift. Several satellite measurements provide input into the forecast system, including near-real time wind data from the Quikscat instrument on NASA’s SeaWinds satellite; ocean height, including waves, measured from NASA’s Topex/Poseidon and Jason satellites; sea surface temperatures measured by the National Oceanic and Atmospheric Administration’s (NOAA) Geostationary Operational Environmental Satellites Advanced Very High Resolution Radiometer instrument.

Aircraft data from the Office of Naval Research is used on cloudy days, when satellites cannot see the ocean surface. A variety of sensors, such as sea gliders that can dive from the ocean surface to several hundred meters depth, ships, and autonomous underwater vehicles, provide ocean water temperature and salinity data. Meters measure ocean currents, and shore- based high-frequency radars provide ocean surface current data. Once these data were input into the forecast system, existing ocean conditions were simulated in 3-D, within 24 hours behind real-time, and more accurate three-day forecasts were then generated in 3-D.

Chao said the NASA 3-D ocean models were useful in planning daily ocean measurement missions during a field campaign conducted last summer in Monterey Bay, Calif. Mission scientists used the forecasts to find interesting areas to observe, such as where cold water from the ocean bottom came up to the surface. Wherever the models seemed to generate an error, more observations were planned, so the forecasts could be improved.

Data is only available for Monterey Bay, where the prototype system was first tested. The next test site will stretch along the coast from San Diego to Baja, Calif. System data are not yet available for public use. Sixteen institutions are evaluating the system or providing data. The researchers hope to eventually issue round-the-clock operational forecasts along all U.S. coastal areas.

In addition to helping with ocean condition forecasts, NASA also is interested in studying the coastal ocean to monitor resources for many purposes including recreation, conservation and commerce. Satellites provide the high-resolution imagery to accomplish this task.

NASA and the Office of Naval Research jointly funded this research. The forecast system exemplifies NASA’s Earth Science Enterprise Coastal Management national application, where agency aerospace research and development of science and technologies are being used with other federal agencies such as NOAA.