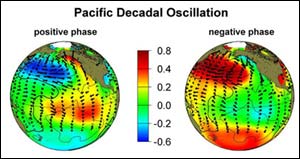 Positive and Negative Phases of Pacific Decadal Oscillation <br> <br>This image shows the Pacific Ocean sea surface temperature changes associated with positive and negative phases of the Pacific Decadal Oscillation. The colors in these maps represent temperature anomalies--differences from the average sea surface temperature during the cool and warm phases of the PDO. Units are degrees Celsius. Credit: Image courtesy of Steven Hare and Nathan Mantua, University of Washington.

The cooler and drier conditions in Southern California over the last few years appear to be a direct result of a long-term ocean pattern known as the Pacific Decadal Oscillation (PDO), according to research presented at the 2004 meeting of the American Meteorological Society.

The study, by Steve LaDochy, associate professor of geography at California State University-Los Angeles; Bill Patzert, research oceanographer at NASA’s Jet Propulsion Laboratory in Pasadena, Calif.; and others, suggests Pacific oceanic and atmospheric measurements can be used to forecast seasonal West Coast temperatures and precipitation up to a year in advance, from Seattle to San Diego.

An important climate controller, the PDO is a basin-wide oceanic pattern similar to El Niño and La Niña but much larger. The PDO lasts many decades rather than just a few months like El Niño and La Niña. The climatic fingerprints of the PDO are most visible in the North Pacific and North America, with secondary influences coming from the tropics. The long-term nature of the PDO makes it useful for forecasting, as its effects persist for so long.

Since mid-1992, NASA has been able to provide space-based, synoptic views of the entire Pacific Ocean’s shifts in heat content with the Topex/Poseidon mission and its follow-up mission, Jason (which began in 2001). Before these satellites were available, monitoring oceanic climate signals in near-real time was virtually impossible.

The remarkable data and images can tag and monitor the shifts in short-term climate events, like El Niño and La Niña, and long-term events such as the PDO. These data provide a 13-year continuous, complete time-series of two major El Niños and two La Niñas, and have made it possible to detect a major phase shift of the PDO. Patzert and LaDochy show these data, combined with longer-term studies of land-based data, provide a powerful set of forecasting tools.

The PDO shifted to a negative, cool phase, leading to wetter conditions in the U.S. Pacific Northwest, and drier than normal conditions in Central and Southern California this decade. Since the last 1997-1998 El Nino, the Los Angeles area had only 79 percent of its normal rainfall, Patzert said. Lake Mead, the great fresh-water reservoir in southeast Nevada, is at less than 50 percent of normal capacity. Also, huge West Coast fires over the past few years have been greatly exacerbated by PDO-induced drought, Patzert added.

“These shifts in the PDO are long-term tendencies, which actually have a bigger economic impact than El Niño,” said Patzert. “People talk about floods from El Niño, but what really has a harsh and costly impact is a five-year drought.”

“A full cycle of the PDO (cool to warm and back to cool) runs about 50 years,” said LaDochy. “Over the next several years there is going to be a tendency toward dry and colder temperatures in the southern U.S. West Coast. It is very difficult to forecast day-to-day here on the West Coast, but we can say with some confidence that over the next five years, we’d better start saving water.”

The researchers used over 50 years of U.S. climatic information, and Pacific atmospheric and oceanic data from the National Oceanic and Atmospheric Administration National Centers for Environmental Prediction. By comparing data sets, they saw strong correlations between Pacific climate patterns, temperatures and precipitation trends on the West Coast. They then were able to develop “hindcasts” to explain temperature and precipitation variability for West Coast regions. These decadal cycles also will be useful for explaining future regional climate variability.

NASA’s Earth Science Enterprise is dedicated to understanding the Earth as an integrated system and applying Earth System Science to improve prediction of climate, weather and natural hazards using the unique vantage point of space.