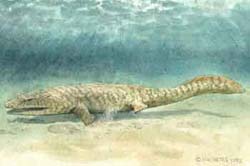 Water-color by Ahlberg (representing Elginerpeton from Scotland) showing roughly what a Devonian tetrapod might have looked like.

In the 19th century a fossil was uncovered in Belgium that was believed to be the jaw of a fish. Now a team of scientists have shown that it is in fact a fossil from an ancestor of all present-day land animals. It is the first discovery of a so-called tetrapod from the Devonian Period in continental Europe, which may trigger an interest in re-examining objects in museums.

In collaboration with researchers from France, England, and Belgium, Per Ahlberg, professor of evolutionary organism biology at Uppsala University, has demonstrated for the first time that four-legged fish, tetrapods, existed on the European continent during the Devonian Period (about 365 million years ago). These first land vertebrae became the ancestors of all present-day vertebrate amphibians, reptiles, birds, and mammals–and humans. The find also resembles the known “four-legged fish” Ichthyostega that was found by Swedish scientists in Greenland in the 1930s. Fossils of tetrapods from the Devonian Period are extremely rare. In recent years fragments have been found in the US, Scotland, Latvia, and China, among other places, but none of these bear any striking resemblance to Ichthyostega.

The fossil from Belgium is fragmentary (a portion of a lower jaw) but is interesting for several reasons:

Today we have considerably more detailed anatomical knowledge about the earliest tetrapods than 20 or 100 years ago, which makes it possible to identify them even from tiny fragments, such as portions of a lower jaw. In the past it would have been necessary to have at least the better part of a skull (or the rest of the skeleton) in order to recognize a tetrapod. Methods for extracting the fossil from its enclosing stone have also advanced substantially. A new and extremely interesting technique is CT scanning, entailing a series of “x-ray sections” through a fossil, thus visualizing its three-dimensional structure even while it is fully embedded in stone.