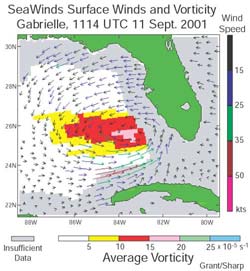 SeaWinds Spots Gabrielle Early <br>The arrows represent wind speed, color and size indicate the magnitude (larger arrow=stronger wind). The average vorticity, or spin, of the atmosphere is indicated by background color (blue=strongest rotation). This area of low pressure is indicative of the formation of a tropical depression. This depression was spotted using SeaWinds data 10 hours before the National Hurricane Center classified it as a tropical depression at 5 p.m. on Sept. 11, 2001. Gabrielle later strengthened to Hurricane status at 11 p.m. Sept. 16, after crossing Florida from the Gulf of Mexico into the open Atlantic Ocean. <br>

NASA’s QuikSCAT satellite is providing meteorologists with accurate data on surface winds over the global oceans, leading to improved 2- to 5- day forecasts and weather warnings. The increased accuracy, already being used in hurricane forecasts, is bringing economic savings and a reduction in weather-related loss of life, especially at sea, according to a recent NASA study.

Robert Atlas, a research scientist at NASA’s Goddard Space Flight Center in Greenbelt, Md., demonstrated the initial beneficial impact of scatterometer data on weather prediction. In a recent experiment, he showed how the combined use of data from two scatterometers can lead to an even larger increase in the accuracy of weather analyses and forecasts, especially at the two to five-day range. One scatterometer is onboard NASA’s QuikSCAT satellite and the other is on the Japan Aerospace Exploration Agency’s Midori-II (ADEOS-II) satellite. In 2003, the Midori-II instrument became non-operational, but while both instruments worked, they showed the capability to improve forecasting. These findings will be presented on Jan. 14, at the American Meteorological Society’s Annual Meeting in Seattle.

The SeaWinds scatterometer is the key instrument aboard QuikSCAT that provides ocean surface wind speed and direction measurements that lead to improved prediction of storms at sea. SeaWinds can acquire hundreds of times more observations of surface wind velocity each day than can ships and buoys, and is the only remote-sensing system able to provide continuous, accurate and high-resolution measurements, regardless of weather conditions. The data is especially valuable where observations are otherwise sparse — such as the Southern Hemisphere and tropics.

SeaWinds operates by transmitting high-frequency microwave pulses to the ocean surface and measuring the “backscattered” or echoed radar pulse bounced back to the satellite.

Atlas added the satellite “provides better coverage of the Earth’s surface and allows forecasters to detect storms earlier than ever before.” Unlike some other satellites, QuikSCAT’s SeaWinds instrument can “see” through the clouds and scrutinize conditions — including rainfall and wind at the ocean’s surface.

During the 1999 hurricane season, the National Hurricane Center used QuikSCAT data to identify eight hurricanes. In those cases, QuikSCAT detected circulating winds well before other it could be seen as cloud swirls by other satellites. Additionally, a previous case study of Hurricane Cindy in 2000 found that use of QuikSCAT data lead to substantial reduction in projected storm intensity and movement errors.

Forecasters in the western United States also benefit from QuikSCAT data since most of the weather over the West Coast is produced by storms originating over the Pacific Ocean, where there are relatively few surface observations.

QuikSCAT can aid in determining the location, direction, structure and strength of severe marine storms that often slam into the area during the winter. East coast forecasters also find QuikSCAT data beneficial in the prediction of intense winter storms, including nor’easters, which travel up the Atlantic seaboard and batter coastal areas with gusty winds and heavy precipitation.

Despite the gains made with QuikSCAT, Atlas said “NASA is committed to making further improvements by designing advanced scatterometers to be sure all storm systems are detected in a timely manner.”

NASA’s Earth Science Enterprise is dedicated to understanding the Earth as an integrated system and applying Earth System science to improve prediction of climate, weather, and natural hazards using the unique vantage point of space.