From Neighborhoods to Globe, Nasa Looks at Land 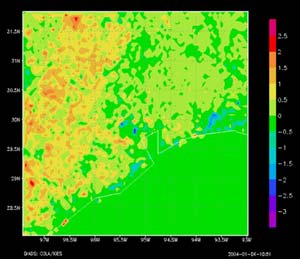 Average Difference in Leaf Area Index for Houston Metro Area between 2001 and 2002. <br> <br>This 5 kilometer resolution image of the Houston area shows the differences in Leaf Area Index (LAI) as an average for August between 2001 and 2002. MODIS LAI measurements show, that on average for August between 2001 and 2002, leaf area in some areas within Houston decreased, likely associated with development in the metropolitan area. Non-urban areas to the northwest and west of the city show higher LAI values compared to the 2001-2002 average, indicating more vegetation. This slide underscores the importance of using current LAI data (rather than climatological, as is standard) in models like LIS. Credit: NASA/Land Information Systems <br>

Satellites and computers are getting so good, that now they can help study human activity on scales as local as ones own neighborhood, and may answer questions concerning how local conditions affect global processes, like water and energy cycles.

NASA’s Land Information System (LIS) uses computer models to predict impacts that cities and other local land surfaces might have on regional and global land and atmospheric processes. Dr. Christa Peters-Lidard, Co-Principal Investigator and Project Manager for LIS, at NASA’s Goddard Space Flight Center (GSFC) in Greenbelt, Md., gave a presentation on LIS this week at the annual meeting of the American Meteorological Society in Seattle.

Until recently, scientists could not model detailed, local interactions between land and atmosphere on the global scale because satellites did not provide a close enough view of Earth, and computers were too limited. But with cheaper high-performance computers, and with satellite technologies like the Moderate Resolution Imaging Spectroradiometer (MODIS) instrument on the Terra and Aqua satellites, scientists are working to predict energy and water cycles for the entire globe at a scale of 1 kilometer (km) (.6 miles). That means computer models can now supply information about processes that occur locally, like within neighborhoods where people live, for example. The global LIS has been implemented at 5 km (3.1 miles) resolution and will be implemented at 1 km resolution in February, 2004.

“Now we can apply all these resources to understand and predict how humans impact their local water and energy cycles and ultimately their weather and climate,” said Peters-Lidard.

As a case study implementing one simple aspect of what LIS can do, Peters-Lidard, colleague Paul Houser of NASA GSFC, and others used a model to predict summertime temperatures in Houston for August 22, 2002. The model found temperatures were 1 to 2 degrees Celsius (1.8 to 3.6 degrees Fahrenheit) warmer than surrounding non-urban areas on that day. While this example offers an illustration of the model, predictions like this may be made over days, months, and years, for temperatures, amounts of moisture in soils, water runoff and drainage, snowpack amounts, energy fluxes, and much more.

In the demonstration, the model predicted for the same day that the Houston urban surface temperature was approximately 0.5 to 1 degree C warmer (0.9 to 1.8 degrees F) throughout the night and as much as 3 degrees C warmer (5 degrees F) around midday. Prior NASA studies have shown that built-on surfaces with few trees absorb heat and create urban heat islands, which in turn create updrafts of warm air, leading to more rain around and downwind of cities like Houston and Atlanta.

The LIS case study offers an example of the future of climate-related computer models, where models will incorporate the land-atmosphere processes created by local land surfaces. By including local energy and water cycles in computer models, people will be able to apply predictions to climate and weather, agricultural forecasting, water resource management, hazard mitigation and more.

The LIS uses several land surface models, which are typically run on computers capable of billions of calculations per second. These models contain precipitation and radiation observations, near-real time meteorological information, and data on topography and soils. They also make use of 1 km MODIS Leaf Area Index (LAI), which measures plant density and growth, and assigns a quantifiable value to the amount of vegetation on the ground.

MODIS LAI measurements show, that on average between 2001 and 2002, leaf area in some areas within Houston decreased, likely associated with development in the metropolitan area. Non-urban areas to the northwest and west of the city show higher LAI values compared to the 2001-2002 average, indicating more vegetation.

Applications of the LIS are countless. For example, the U.S. Bureau of Reclamation plans to use the LIS to help determine snowpack, amounts of soil moisture, and the loss of water into the atmosphere from plants and the soil, a process known as evapotranspiration. Understanding these variables in the water cycle is a key to managing water in such resource-limited areas.

LIS may also allow scientists to possibly mitigate heat islands by running “what if” scenarios, like testing how temperatures change when hypothetical trees are planted.

The project has been supported by NASA’s Earth Science Technology Office Computational Technologies Project. NASA’s Earth Science Enterprise is dedicated to understanding the Earth as an integrated system and applying Earth System Science to improve prediction of climate, weather and natural hazards using the unique vantage point of space.