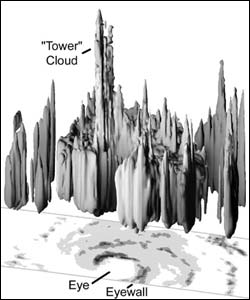 AN UNUSUALLY DEEP CONVECTIVE TOWER IN HURRICANE BONNIE AS BONNIE INTENSIFIED <br> <br>This TRMM Precipitation Radar overflight of Hurricane Bonnie shows an 11 mile high "tower" cloud perched on the eyewall of the storm. Bonnie was observed on August 22, 1998, a few days before it struck North Carolina. The 3D volume represents the raining region inside the clouds of the hurricane. This 3D volume contains all of the locations where the rain rate was at least 0.08 inches per hour. The eye and eyewall are labeled on the image of surface rain rate. Cyclone intensification may be associated with the presence a tower cloud in the cyclone’s eyewall. CREDIT: NASA / JAXA <br>

They are called hurricanes in the Atlantic, typhoons in the West Pacific, and tropical cyclones worldwide; but wherever these storms roam, the forces that determine their severity now are a little less mysterious. NASA scientists, using data from the Tropical Rainfall Measuring Mission (TRMM) satellite, have found “hot tower” clouds are associated with tropical cyclone intensification.

Kelley and Stout define a “hot tower” as a rain cloud that reaches at least to the top of the troposphere, the lowest layer of the atmosphere. It extends approximately nine miles (14.5 km) high in the tropics. These towers are called “hot” because they rise to such altitude due to the large amount of latent heat. Water vapor releases this latent heat as it condenses into liquid.

A particularly tall hot tower rose above Hurricane Bonnie in August 1998, as the storm intensified a few days before striking North Carolina. Bonnie caused more than $1 billion damage and three deaths, according to the National Oceanic and Atmospheric Administration National Hurricane Center.

Kelley said, “The motivation for this new research is that it is not enough to predict the birth of a tropical cyclone. We also want to improve our ability to predict the intensity of the storm and the damage it would cause if it struck the coast.” The pioneering work of Joanne Simpson, Jeffrey Halverson and others has already shown hot towers increase the chance a new tropical cyclone will form. Future work may use this association to improve forecasts of a cyclone’s destructive potential.

To achieve their goal, Kelley and Stout needed to compile a special kind of global statistics on the occurrence of hot towers inside tropical cyclones. The only possible data source was TRMM satellite, a joint effort of NASA and the Japan Aerospace Exploration Agency. “Many satellites can see the top of a hot tower, but what’s special about this satellite’s Precipitation Radar is that it gives you ’X-ray vision’ so you can see inside a hot tower,” Kelley said. To compile global statistics, the radar needs to be orbiting the Earth.

After compiling the statistics, Kelley and Stout found a tropical cyclone with a hot tower in its eyewall was twice as likely to intensify within the next six hours than a cyclone that lacked a tower. The “eyewall” is the ring of clouds around a cyclone’s central eye. Kelley and Stout considered many alternative definitions for hot towers before concluding the nine-mile height threshold was statistically significant.

Funding for the research was provided by NASA’s Earth Science Enterprise. The Enterprise strives to advance Earth System Science and to improve the prediction of climate, weather and natural hazards from the unique vantage point of space.