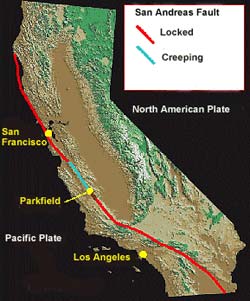 Medium to large earthquakes occurring along the central San Andreas Fault appear to cluster at regular three-year intervals – a previously unnoticed cycle that provides some hope for forecasting larger quakes along this and other California faults.

A study by University of California, Berkeley, seismologists shows a higher probability of moderate to large quakes – magnitude 4, 5 and 6 – just as the frequency of smaller quakes, called microquakes, begins to increase along the northern half of a 110-mile segment of the central San Andreas Fault. The scientists found that the frequency of these repeating microquakes along the fault segment rises and falls over a three-year period, and that moderate to large earthquakes are six to seven times more likely to occur at the upswing of this cycle.

“Larger earthquakes along the northern portion of the central San Andreas occur preferentially when the pulse starts up,” said Robert Nadeau, an assistant research geophysicist at the Berkeley Seismological Laboratory. “Quakes greater than magnitude 3.5 tend to happen within one year of the pulse’s initiation or start.

The study covers 16 years of data, from 1984 until 2000, on quakes along a section of the San Andreas Fault between Loma Prieta in the north, near the city of Santa Cruz, and Parkfield in the south. The San Andreas, which stretches from Los Angeles into the Pacific Ocean off the northern coast of California, broke along its northern half in 1906 to cause the great San Francisco earthquake and fire.

“This phenomenon suggests that something is going on deep under the seismogenic zone, loading this zone and inciting quakes,” Nadeau said. The seismogenic zone is the brittle upper crust where earthquakes occur. “This has promise for forecasting larger quakes, though this is our first look and it needs to be refined more.”

It’s still unclear whether major quakes such as the 8.0 quake that struck San Francisco in 1906 are associated with quasiperiodic pulses of microquakes, he noted.

Nadeau reports the findings in the Jan. 9 issue of Science in a paper coauthored by his late collaborator, UC Berkeley seismologist Thomas V. McEvilly, a professor of earth and planetary science who died a year ago. Nadeau also will discuss his findings at a two-day workshop, Jan. 13-14, at U.S. Geological Survey headquarters in Menlo Park, as part of the National Earthquake Hazards Reduction Program.

Microquakes are quakes that cannot be felt, typically lower than magnitude 3.5. Once thought to carry little information, McEvilly and Nadeau have turned that thinking around in recent years thanks to studies at Parkfield. UC Berkeley installed 10 borehole seismometers several hundred meters underground at Parkfield more than 15 years ago to collect more precise data on the position of microquakes, and have shown that a large number – perhaps half – actually occur repeatedly in the same spot, popping off every few months to every few years. One has repeated 23 times in the same location.

Nadeau thinks that these “repeaters” represent places where the San Andreas Fault is not lubricated by fluid or mud and thus doesn’t slide as easily as surrounding areas. This may result from an irregularity on one side of the strike/slip fault that repeatedly catches the other side, breaks, and rewelds, only to break again when the strain reaches a certain threshold.

Whatever the cause, these microquakes “are a new way to estimate where zones are locked, how fast the fault creeps, and the tectonic loading in the area,” Nadeau said. “Repeating microquakes also let us fill in gaps along the fault where we don’t have reliable measures of creep.”

Locked zones, which generate larger quakes when they break, do not produce microquakes. Apart from a small number of locked zones, most of the central San Andreas Fault seems to slip smoothly without large quakes, putting stress on the small stuck patches, which eventually break and cause microquakes.

From their study of microquakes at Parkfield, Nadeau and McEvilly discovered in 1999 that these repeating microquakes could be used to predict the rate at which the fault is slipping deep underground. The faster the slip, the more frequently a given patch generates microquakes.

With this background, they decided to look at the central San Andreas Fault north of Parkfield, stretching all the way to the presumed rupture or breakage of the 1989 Loma Prieta earthquake. The stretch between Parkfield and Loma Prieta creeps fairly evenly at about one inch per year.

When they looked at 2,594 microquakes occurring at 515 repeater spots along the 110-mile segment, with data coming from UC Berkeley’s borehole seismometers and from the Northern California Seismic Network, they found periodic pulses of microquakes every three years on the northern half, indicating a periodic increase in slip rate as deep as 6.3-6.9 miles below ground. When they looked back at 45 quakes greater than 3.5 magnitude that occurred along the same segment during that time, these quakes tended to cluster within one year after the start of microquake activity.

Among those large quakes were the 7.1 magnitude 1989 Loma Prieta quake and the 1998 5.4 magnitude San Juan Bautista quake, both of which coincided with a rise in microquakes.

Nadeau said, however, that it is unclear whether quakes as large or larger than the Loma Prieta quake will always correlate with upswings in microquake activity. The slippage that generates these microquakes also puts strain on locked zones like that near Loma Prieta, which eventually will cause them to break and generate major quakes.

Interestingly, the southern portion of the central San Andreas, just north of Parkfield, showed a different periodicity in microquakes, about 1.5 years. Large quakes are not known to occur on this part of the fault, however. The region below Parkfield showed no consistent pattern of microquakes, probably because this zone is locked, which suppresses microquakes.

Fault pulsing where large earthquakes occur has been seen at two other places, in Japan and in the Pacific Northwest, but both of these sites are subduction zones where the earth’s crust is diving beneath adjacent tectonic plates.

“People are still trying to understand what is going on in the phenomenon,” Nadeau said.

Borehole seismometers implanted by UC Berkeley at a depth of 200 meters along the Hayward Fault have already shown microquake activity preceding a few magnitude 4 quakes, but it is unclear yet whether larger quakes on that fault are correlated with upticks in microquake activity, he added.