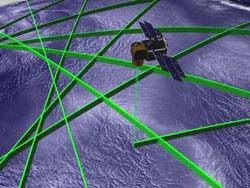 ICESat’s single scientific instrument is called GLAS, for Geoscience Laser Altimeter System. It is the first instrument to map our planet using lasers from a dedicated satellite platform. Using one of its three onboard lasers, GLAS precisely measures the time it takes for a pulse of light to travel from the laser to a reflecting object, in this case the Earth’s surface and any intervening clouds, and return to detectors on the satellite. In addition, other parts of GLAS help determine precisely where GLAS is, relative to our world below. Credit: NASA

The principal objective of the ICESat mission, and its Geoscience Laser Altimeter System (GLAS) instrument, is to measure the surface elevations of the large ice sheets covering Antarctica and Greenland and determine how they are changing. Much of an ice sheet’s behavior and response to changes in climate are apparent in their shape and how that shape changes with time. The laser sends short pulses of green and infrared light to Earth 40 times a second and collects the reflected laser light with a one-meter telescope.

The measurements have provided revolutionary accuracy and detail about the elevation of ice sheets and the elevation structure of land surfaces. ICESat is providing scientists with the most accurate measurements to date of the heights of clouds. It is also providing critical observations of atmospheric particles, called aerosols, over the ice sheets and the rest of the world. These help climate modelers, who reconstruct the past and project future climate.

“NASA has developed tremendous capabilities over the last several decades for observing our Earth in two dimensions. With ICESat, we can see the critical third-dimension, that is, the vertical dimension of land, water, and the atmosphere, in new and innovative ways,” said Waleed Abdalati, ICESat Program Scientist, NASA Headquarters, Washington. “The first few months of ICESat data have really been phenomenal. We can see detail in ice and land features that were never visible before from space.”

Scientists are using ICESat data to develop what are called “Digital Elevation Models,” 3-D high-resolution images of ice sheets in Greenland and Antarctica. Gathering these data from space will allow scientists, to obtain an unprecedented view of how and where ice sheets are growing and shrinking. This information is critical to understanding how the Earth’s changing ice cover affects sea level.

Earlier this year, ICESat’s first topographic profiles across Antarctica revealed details never before seen of features such as the ice streams of the Siple Coast, the Amery Ice Shelf, and megadunes in the Antarctic interior.

“The amount and coverage of heavy dust and pollution loading in many regions of the Earth that we are seeing in the initial ICESat data are unexpected,” said James Spinhirne, principal atmospheric scientist for ICESat at NASA’s Goddard Space Flight Center, Greenbelt, Md. These include the rivers of dust from the Sahara desert, massive dust storms, and large-scale smoke from burning vegetation. The observations tie smoke, dust and clouds directly to winds and global transport.

ICESat was launched January 12, 2003. It is the latest in a series of NASA Earth observation spacecraft designed to study the environment of our home planet and how it may be changing. NASA’s Earth Science Enterprise is dedicated to understanding the Earth as an integrated system and applying Earth System Science to improve prediction of climate, weather and natural hazards using the unique vantage point of space.

ICESat scientists will present the latest results from ICESat during a press conference on December 9 at 3:00 pm PT in Room 2012 Moscone West, at the 2003 Fall Meeting of the American Geophysical Union in San Francisco. They will also convene special sessions C31A and C31D detailing these results on December 10, beginning at 10:20am PT in the Moscone Center, Room MCC 3010.