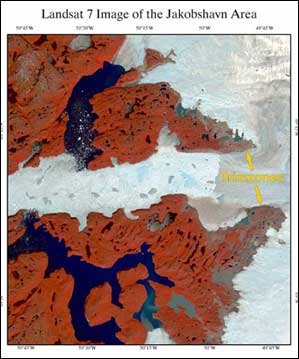 This image of Tassiusaq Fjord on the west coast of Greenland shows a moraine -- a pile of boulders and other debris pushed up by a glacier which has long since retreated inland. Scientists at Ohio State University and their colleagues will use plant material found in moraines to gauge the flow and retreat of glaciers on the island. A new study using data from NASA’s Landsat 7 and Terra satellites has shown that the nearby Jakobshavn Glacier is flowing faster than before, and it is retreating rapidly from the Greenland coastline. Data for this image came from Terra’s Advanced Spaceborne Thermal Emission and Reflection Radiometer instrument. Image created by Catherine Tremper, courtesy of Ohio State University. <br><br>

One of the world’s fastest-moving glaciers is speeding up and retreating rapidly, a recent study has revealed.

The finding has surprised scientists, because while the margins of the Jakobshavn (pronounced “yah-cub-SAH-ven”) Glacier had been slowly retreating from the southwest coast of Greenland since before 1900, this retreat appeared to have stopped by the early 1990s when the first accurate measurements were made. Now the glacier is accelerating.

The glacier, one of the major drainage outlets of Greenland’s interior ice sheet, is thinning more than four times faster than it had for most of the 20th Century. Accompanying this thinning is a substantial increase in ice speed.

Among those examining the situation are scientists at Ohio State University, who are processing the satellite data and pinpointing the best sites for a follow-up study.

Glaciers such as Jakobshavn are large, flowing masses of ice that contain smaller streams of ice that move independently within them, just as the Gulf Stream moves within the Atlantic Ocean.

Glaciers and ice streams carry ice from the interior of an even larger ice sheet out to sea, where the ice breaks up into icebergs in a region called the calving front. In the critical region upstream from the calving front, scientists measure the thickness of the ice to gauge conditions within the glacier.

Scientists believe that Jakobshavn remained unchanged until 1900, when the ice surface near the calving front began lowering by 2.5 meters (about 8 feet) per year on average. According to the new data collected by NASA’s Airborne Topographic Mapper laser system, the glacier was slightly thickening between 1991 and 1999, before it started to thin rapidly. Current thinning rates have reached 12 meters (about 39 feet) per year.

“This ice stream is pretty important, because it drains a large part of the Greenland ice into Baffin Bay,” he said. “What we want to know is how significant is this increase in activity, and exactly how long has it been going on?”

Key to the study is the processing of satellite data, in this case from NASA’s Landsat 7 and Terra satellites. In the study reported at the meeting by Abdalati, scientists used Landsat 7 images to determine the velocity of the glacier by tracking distinct features on the imagery.

These images also carry information about the past conditions of the glacier and its environment. Sensors aboard Landsat 7 and Terra record images of the earth at many different wavelengths, from near-infrared and thermal radiation to different colors of visible light.

“These are images one can never see with the human eye,” explained Csatho. “By combining images from different wavelengths, we can learn a lot about a region.”

Vegetation, for instance, appears dark in visible light, but bright in infrared. By tracking the extent of vegetation and lichens on areas of Greenland once covered by ice, Csatho and her colleagues measure the retreat of the Jakobshavn Glacier.

The Ohio State scientists removed the atmospheric and topographic distortions from the satellite data and assembled a picture of the land cover, ice flow and glacial geomorphology in the region.

Then in July 2003, before they’d finished processing all the satellite data, they traveled to Greenland to take their own measurements of surface properties of the land next to the ice for comparison.

From the moment they arrived, it was clear to them that conditions in the area were changing rapidly.

They had planned the location of their campsite along the coastline in order to be near the glacier’s edge. But when they arrived, the ice wasn’t there — it had retreated about 2 kilometers (1.2 miles) inland since the satellite images were taken in 2001.

Mapping of glacial landscape features showed that the glacier had been retreating intermittently since 1900. Evidence in the form of freshly deposited sediments confirmed that glacier retreat has increased in recent years.

The initial thinning of the Jakobshavn Glacier was probably a delayed response to warming that occurred after the Little Ice Age, a 500-year cold period that ended around 1800, van der Veen said.

But that doesn’t explain the rapid thinning that began after 1993.

As to whether global climate change is to blame for the acceleration, van der Veen is not convinced. “I wouldn’t jump to that conclusion at this point,” he said. “But we definitely want to go back to do a long-term study of the area.”

The ice scrapes the ground as it moves, and the Ohio State scientists are trained to read the scars they see on satellite images. Where a glacier’s edge once marked the ground, they see the rock it carved and the boulders it pushed ahead of it during its advance.

The left-behind piles of debris are called moraines, and their evidence can be seen even in the hills and valleys of highly populated and industrialized areas like the state of Ohio, where drainage from North American glaciers during the last ice age created the Ohio River.

In Greenland, many of the moraines zigzag over remote mountaintops, so the Ohio State scientists are using the satellite images from Terra to pick important sites to explore in the future. They will dig up long-frozen plants from the most promising moraines, and use carbon dating to gauge when the glaciers were last there.

Those measurements will paint a clearer picture of the area’s history, and put current conditions into better perspective, scientists believe.

Other Ohio State scientists on the project include Toni Schenk, professor of civil and environmental engineering and geodetic sciences; Catherine Tremper, a former graduate student in geological sciences, and now an image processing consultant to the university; Sung Woong Shin, a postdoctoral researcher at BPRC; and Yushin Ahn, Taehun Yoon, and Kyung In Huh, all current graduate students.

They are working with William Krabill, a scientist at NASA’s Laboratory for Hydrospheric Processes at Wallops Flight Facility in Virginia; Serdar Manizade and Robert Thomas, scientists for EG&G Services, also at Wallops; and Jim Golder, a scientist with Raytheon Information Technology and Scientific Services at Goddard Space Flight Center, Greenbelt, MD.