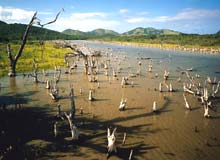 Wetlands across four continents will be the focus of study during ESA’s Globwetland project. Wetlands fulfil a large number of very useful biological and hydrological functions but are increasingly under threat from human activities. <br><br>

Dotted across varied regions of our planet are the waterlogged landscapes known as wetlands. Often inaccessible, these muddy areas are actually treasure houses of ecological diversity – their overall value measured in trillions of Euros.

For much of the last century wetlands have been drained or otherwise degraded, but scientific understanding of their important roles in terms of biology and the water cycle has grown, spurring international efforts to preserve them. On 20 November ESA formally began a project to map wetlands from space, providing data on around 50 sites in 21 countries worldwide.

In 1971 an inter-governmental treaty established the Ramsar Convention on Wetlands, establishing a framework for the stewardship and preservation of wetlands. Today more than 1310 wetlands have been designated as Wetlands of International Importance, a total area of 111 million hectares. The Convention’s 138 national signatories are obliged to report on the state of listed wetlands they are responsible for.

ESA’s new €1 million Globwetland project is producing satellite-derived and geo-referenced products including inventory maps and digital elevation models of wetlands and the surrounding catchment areas. These products will aid local and national authorities in fulfilling their Ramsar obligations, and should also function as a helpful tool for wetland managers and scientific researchers.

“The Ramsar Convention on Wetlands stresses that targeted assessment and monitoring information is vital for ensuring effective management planning for wetlands, their hydrology and their catchments,” explained Nick Davidson, Ramsar’s Deputy Secretary General. “Yet for wetland managers and decision-makers in many countries access to sound information about wetlands and how they are changing is often a critical gap.

“By working with users at site and catchment scales the Globwetland project should contribute significantly to helping achieve effective management of these critical important ecosystems for biodiversity and human well-being.”

With wetlands often made up of difficult and inaccessible terrain, satellites can help provide information on local topography, the types of wetland vegetation, land cover and use and the dynamics of the local water cycle. In particular radar imagery of the type provided by ESA’s Envisat is able to differentiate between dry and waterlogged surfaces, and so can provide multitemporal data on how given wetlands change seasonally.

Globwetland products are being provided for a wide range of terrain types to users across four continents: North and South America, Africa, Asia and Europe, including European Russia. In Spain the Globwetland end-user is the government’s Ministry of the Environment.

“We have previously used aerial photography to prepare wetland maps, but this is the first time we will use Earth Observation data,” said José Ramón Picatoste Ruggeroni, Director General of Nature Conservation and Subdirector General of Biodiversity Conservation. “The areas we are most interested in are land cover and land cover analysis, topography dynamics and subsidence layers, water cycle and quality maps.

“In co-operation with the Spanish regional authorities involved in nature conservation and local wetland managers, we hope to investigate the possibility of achieving a common standard of regularly updated geoinformation to monitor ecological changes in the Spanish Ramsar sites.”

At the other side of the continent, wetlands comprise a third of the territory of the Russian Federation, the majority of it in the form of peatlands. Through much of the 20th century these areas were regarded as wasteland and drained for peat extraction – ending up as unproductive lands that do not contribute either economically or in terms of biodiversity, and also cause ecological problems such as dust storms and uncontrolled carbon dioxide emissions from smouldering peat fires.

In Russia the Globwetland partner is the Ministry of Ecology and Land Use of Moscow region, and has a particular interest in using periodic satellite data to monitor peat fires and estimate how effective a new rewetting project is in preventing further outbreaks.

While in South Africa, Globwetland partner the Department of Environmental Affairs and Tourism (DEAT) seeks to use satellite data to help fulfil its Ramsar obligations for its existing three-site wetlands inventory. The Department also plans to map a separate site, the Prince Edward Islands Special Nature Reserve, for the first time.

South Africa hopes to propose the offshore Reserve for designation as a new Ramsar Wetland of International Importance, but its uncharted nature is currently an obstacle to achieving this. This Southern Ocean site is also being nominated next year as a UNESCO World Heritage Site.

Why are wetlands so valuable?

Studies of wetlands show they store and purify water for domestic use, recharge natural aquifers as they run low, retain nutrients in floodplains, help control flooding and shore erosion and regulate local climate.

Most of all, wetlands support life in spectacular variety and numbers: freshwater wetlands alone are home to four in ten of all the world’s species, and one in eight of global animal species.

An assessment of the monetary value of natural ecosystems published in Nature in 1997 arrived at a figure of 27.7 trillion Euros (33 trillion dollars), with wetland ecosystems making up €12.5 trillion ($14.9 trillion) – or 45% – of this total.

Much of human civilisation has been based around river valleys and floodplains. However, global freshwater consumption rose sixfold during the 20th century, a rate more than double that of population growth. And world population is set to rise by 70 million people a year for the next two decades.

Couple that trend with the threat of accelerating climate change, and biologically-productive and hydrologically-stabilising wetlands look like necessities we can ill do without.