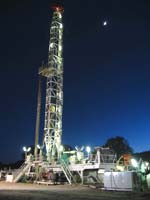 Despite tremendous technological advances in earthquake seismology, many fundamental mysteries remain. The critical question of whether earthquakes will ever be predictable continues to plague seismologists – in part because there is no way to directly observe what goes on miles below the surface where earthquakes occur.

All of that is about to change, however, as a team of scientists led by Stanford University and the U.S. Geological Survey (USGS) finally begins construction of the long-awaited San Andreas Fault Observatory at Depth (SAFOD) – a 2.4-mile-deep observatory that, for the first time, will give researchers the tools they need to conduct around-the-clock monitoring from inside an active earthquake zone.

Proposed more than a decade ago, SAFOD is one of four major components of EarthScope – a new five-year, $219 million National Science Foundation (NSF) initiative designed to investigate the geological forces that shape the North American continent.

SAFOD will receive $20.5 million from NSF through 2008 – approximately ten percent of the current EarthScope budget. Two other components of EarthScope will receive the bulk of the funding:

Plate Boundary Observatory (PBO): NSF has allocated $100 million for PBO – a large-scale project designed to study strain and other geological forces along the active boundary between the Pacific and North American tectonic plates. PBO will consist of some 800 permanent Global Positioning System (GPS) monitoring stations and 100 extremely sensitive borehole strainmeters deployed in 12 western states – particularly near active faults and volcanoes.

USArray: NSF has provided $69.8 million to construct USArray – a network of thousands of seismic stations that will be installed across the continental United States and Alaska to address questions about the structure and properties of the Earth’s crust and upper mantle.
SAFOD, PBO and USArray will be deployed over the next five years and will operate and produce data for at least 10 years after that. Still to be funded is the fourth component of EarthScope, the Interferometric Synthetic Aperture Radar (InSAR): a dedicated radar satellite system that will study minute changes in the Earth’s surface over broad areas.

“Considering its scale, its interdisciplinary nature and its 15-year duration, EarthScope is the biggest thing that’s ever happened in the solid earth sciences,” said Mark Zoback, professor of geophysics at Stanford and co-principal investigator of SAFOD. He pointed out that, in addition to Stanford and USGS, more than 100 universities in the United States will participate in the program.

“The key contribution of EarthScope will be the integration of SAFOD, PBO and USArray to make a revolutionary advance in our knowledge of how the dynamic Earth works, including a better understanding of when and where damaging earthquakes occur,” added James H. Whitcomb, section head of NSF’s division of earth sciences.

Zoback, along with geophysicists and co-principal investigators Steve Hickman and Bill Ellsworth of the USGS Earthquake Hazards Team in Menlo Park, Calif., will coordinate the activities of the SAFOD science team and the contractors who will carry out the drilling.

SAFOD will be constructed on a private ranch near Parkfield, Calif. – a tiny rural town located halfway between Los Angeles and San Francisco. The ranch straddles California’s infamous San Andreas Fault – an 800-mile-long rift that runs from the Mexican border to the northern part of the state.

The fault marks the boundary between the Pacific plate on the west and the North American plate on the east – two landmasses that are slowly moving in opposite directions. As the plates grind against one another, earthquakes are triggered along the fault. Figuring out when and where an earthquake will strike has become the Holy Grail for geophysicists.

“Our current knowledge of fault zone processes is so poor that not only are we unable to make reliable short-term earthquake predictions, we don’t know whether such predictions are even possible,” Zoback observed. “SAFOD could revolutionize our understanding of earthquake physics. By making continuous observations directly within the San Andreas Fault zone at depths where earthquakes start, we will be able to test and extend current theories about phenomena that might precede an impending earthquake.”

Last year, Zoback, Hickman and Ellsworth coordinated the successful drilling of a 1.4-mile-deep vertical pilot hole on the Parkfield ranch about a mile west of the fault. Seismic monitors and other sensors were installed in the pilot hole to provide researchers with detailed information about optimal drilling techniques that will be used in the SAFOD experiment.

“SAFOD will be deeper and more challenging than the pilot hole,” said Hickman. “Using advanced directional drilling technologies developed for the oil and gas industry, we will steer SAFOD as close as possible to a cluster of small earthquakes, known as microearthquakes, that occur repeatedly within the center of the fault zone. These magnitude 2 earthquakes are rarely felt, but they can end up rupturing a football-sized piece of the fault.”

Drilling of the SAFOD borehole will start on the Pacific plate in an area that’s only about 60 feet east of the pilot hole. When finished, the L-shaped borehole will be about 3 miles long. Engineers will drill vertically for the first 1.5 miles, then shift eastward at a 50-degree angle for another 1.5 miles. This angled section will actually pierce the fault zone and wind up embedded in the North American Plate about two miles below the surface. Temperatures at that depth are expected to reach 275 F (135 C).

Drilling will take place during California’s dry season, which roughly lasts from May to October. Phase I is scheduled to begin in June 2004 and continue through October, then resume from June to September 2005. Drilling will cease for the next two years while researchers determine the precise location of the microearthquake clusters inside the fault zone. The final phase of drilling is scheduled to take place from May to September 2007.

“Earthquakes start miles below ground,” noted Ellsworth, chief scientist for the USGS Earthquake Hazards Team in Menlo Park. “Faults may rupture at the surface in large earthquakes, but the place where the forces are stored and released are deep within the fault. The SAFOD hole will go deep enough to get into the heart of the fault zone, where earthquakes really begin.” After drilling, the entire borehole will be cased in cement to allow researchers to install seismometers, strainmeters, temperature sensors and other monitoring devices while collecting subsurface rock and fluid samples for lab analysis. When completed, SAFOD will provide the first real-time measurements of subtle changes in temperature, rock deformation and fluid pressure that occur inside a fault prior to an earthquake.

“The key to the SAFOD observatory is that we’re going to be able to put seismometers and other sensitive instruments right inside the fault zone where it is producing earthquakes to detect exactly how earthquakes work,” Hickman noted.

Previous studies have shown that most of the San Andreas Fault is locked, causing a build-up of stress, which can trigger large temblors of magnitude 7 or greater. But in central California, the fault is constantly slipping through a combination of steady creep and small-magnitude quakes. Parkfield, which is located at the southern transition between the creeping and locked sections of the fault, has experienced only small- to moderate-sized earthquakes – including a series of five magnitude 6 events that occurred, on average, every 22 years between 1857 and 1966.

In 1985, the USGS and the state of California launched the Parkfield Earthquake Experiment, which continues to gather real-time data from an array of instruments on or near the surface of the fault.

“One important goal of the Parkfield Experiment is to try to catch a moderate earthquake,” Ellsworth said. “The last 6 quake struck only a few miles from the SAFOD site in 1966, so we’re overdue. Hopefully, SAFOD will be finished in time to catch the next magnitude 6 quake.”