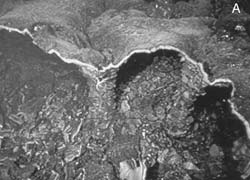 Side view of a collapsed lava pit on the East Pacific Rise near 9°50’N at a depth of 2,500 meters (about 8,000 feet). Two lava pillars in the center of the photo support a piece of the upper crust of the lava flow several inches thick.

Scientists studying the formation of the sea floor thousands of feet below the surface have a new theory for why there are so many holes and collapsed pits on the ocean bottom. In a recent article in the journal Nature, the researchers say the holes and pits of various sizes are probably formed by lava erupting onto the seafloor so quickly it traps water beneath it, forming bubbles of steam that eventually collapse as the water cools. The hardened crust then breaks, forming pock marks and glassy black plates of ocean crust with stalactites on their underside.

Findings by scientists at the Woods Hole Oceanographic Institution (WHOI) and colleagues may help explain the chemical differences between some seafloor lavas and increase understanding of deep-sea volcanic processes. The report also offers new insights into microbes living inside the ocean crust, an area known as the deep biosphere. No one has witnessed an undersea volcanic eruption, although researchers diving in the three-person submersible ALVIN have visited sites of very recent eruptions that were colonized almost immediately by exotic life forms.

Geologists Daniel Fornari and Deborah Smith of WHOI, along with lead author Michael Perfit of the University of Florida and colleagues from the University of Leeds in the United Kingdom, University of Hawaii and the US Geological Survey, report that up to now, scientists thought there was very little interaction between the very cold sea water at the ocean floor several miles deep and the molten lava that erupts to form new crust. Geologists didn’t think the lava, despite reaching temperatures well over 2,000 degrees Fahrenheit, could heat the seawater enough to form steam because of the intense pressure at such great depth.

Based on evidence from hardened lava samples collected during ALVIN dives at the East Pacific Rise off the Pacific coast of Mexico, they now believe that lava erupts so quickly onto the seafloor that it traps seawater under the flow, heats that water into steam to form bubbles that rise up through the lava flow to its top. These steam bubbles, much like the blobs in a lava lamp, are trapped under a relatively thin glassy outer crust.

Inside these bubbles, stalactites of molten lava drip from the crust and become coated with exotic minerals. WHOI Geomicrobiologist Katrina Edwards and graduate student Cara Santelli have noticed that many of the iron rich minerals observed in the lava samples through microscopic analysis are consistent with the iron oxide minerals that are formed in laboratory cultures. Edwards says this could suggest that sometime after formation and cooling, the glassy crusts are colonized and acted on by iron-oxidizing bacteria, and therefore support a subsurface biosphere.

Fornari says these new findings are important to understanding lava formation because the steam has the potential to change the chemistry of the lava, and the presence of bubbles of steam likely affects the way the lava flows across the sea floor. As a result of the steam interaction, lava flows may extend much farther along and across the crest of the mid-ocean ridge, a mountain range circling the earth like the seams on a baseball, forming a shell hundreds of feet thick covering more than half of the planet.

Woods Hole Oceanographic Institution (WHOI) is a private, independent marine research and engineering and higher education organization located in Falmouth, MA. Its primary mission is to understand the oceans and their interaction with the Earth as a whole, and to communicate a basic understanding of the ocean’s role in the changing global environment. Established in 1930 on a recommendation from the National Academy of Sciences, the Institution operates the US National Deep Submergence Facility that includes the deep-diving submersible ALVIN, a fleet of global ranging ships and smaller coastal vessels, and a variety of other tethered and autonomous underwater vehicles. WHOI is organized into five departments, interdisciplinary institutes and a marine policy center, and conducts a joint graduate education program with the Massachusetts Institute of Technology.