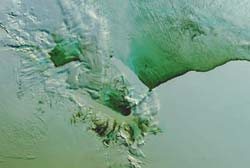 Another Envisat instrument known as MERIS acquired this optical image showing B-15A in the Ross Sea on 16 October 2003. The bottle-shaped iceberg can be seen centre. Below it is the Ross Ice Sheet from which the B-15 berg originated in March 2003. Left of B-15A is McMurdo Sound, location of US and New Zealand Antarctic bases. <br> <br>Credits: ESA 2003

ESA’s Envisat satellite was witness to the dramatic last days of what was once the world’s largest iceberg, as a violent Antarctic storm cracked a 160-km-long floe in two.

A series of Envisat Advanced Synthetic Aperture Radar (ASAR) instrument images acquired between mid-September and October record how the bottle-shaped iceberg B-15A was split by the onslaught of powerful storms, waves and ocean currents as its own weight kept it fixed on the floor of Antarctica’s Ross Sea.

ASAR is especially useful for polar operations because its radar signal can pierce thick clouds and works through both day and night. Radar imagery charts surface roughness, so can easily differentiate between different ice types. Old ice – as on the surface of B-15A – is rougher than newly formed ice.

B-15A began its existence as B-15 in March 2000 – with an area of 11,655 sq km it was the world’s largest known iceberg. This Jamaica-sized floe was created when it broke away from the Ross Ice Shelf. The initial monster berg split into numerous pieces shortly afterwards, with the largest piece designated B-15A.

Like a wall of ice, B-15A remained a stubborn presence for the next two and a half years, diverting ocean currents. This caused increased ice around Ross Island that disrupted breeding patterns for the local penguin colony and required extra icebreaker activity to maintain shipping access to the US base at McMurdo Sound.

B-15A’s end came in sight on 7 October this year, as 120 kph winds buffeted the grounded iceberg during a storm. Two cracks ran into the heart of the iceberg from opposite ends until finally the entire berg gave way.

The larger of the two new pieces has inherited the name B-15A, and the smaller berg named B-15J. They remain largely locked in place, some 3,800 kilometres south of New Zealand. The bergs could persist there for many years – a GPS station has been placed on the 3,496 sq km B-15A to enable study of its future progress.

Despite events such as these there is so far no conclusive evidence as to whether polar ice is actually thinning. Next year will see the launch of ESA’s CryoSat mission, a dedicated ice-watching satellite designed to map precise changes in the thickness of polar ice-sheets and floating sea-ice.

CryoSat will be the first satellite to be launched as part of the Agency’s Living Planet Programme. This small research mission will carry a radar altimeter that is based on a heritage from existing instruments, but with several major enhancements to improve the measurement of icy surfaces.

By determining rates of ice-thickness change CryoSat will contribute to our understanding of the relationship between the Earth’s ice cover and global climate.