In tropics, forests are cool but croplands are hotter 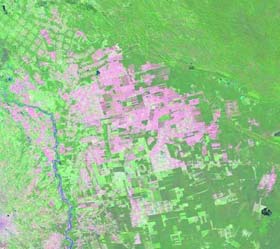 While croplands may provide more food than forests, they don’t offer much relief from hot tropical climes, a new study finds.

A study of Santa Cruz, Bolivia, which used NASA satellites and computer models, reports that cutting down tropical forests and converting grasslands to crops may inadvertently warm those local areas. According to the research, forest canopies create wind turbulence that cools the air, and native grasslands are better adapted to the tropics than crops, in ways that also have a cooling effect.

Lahouari Bounoua, a researcher at the University of Maryland (UMD), College Park, Md., and NASA’s Goddard Space Flight Center (GSFC), Greenbelt, Md., used a computer model to show that temperatures in January may have warmed on average by about 1 degree Fahrenheit in the last 25 years, solely because native forests and grasslands in Santa Cruz were replaced with crops. Co-authors in this interdisciplinary study of land cover and climate changes included University of Maryland researcher, Ruth DeFries, NASA GSFC/UMD scientist Marc Imhoff and NASA GSFC researcher Marc Steininger.

“It’s important to understand the effects of changing land cover in the tropics, because unlike the past, future deforestation is likely to occur in tropical and sub-tropical regions,” said Bounoua.

The Santa Cruz region has one of the highest rates of concentrated deforestation in the world over the last 20 years, a recent study by co-author Steininger found.

According to the computer model, in places where tropical forest species were replaced by crops, nighttime temperatures dropped slightly, while daytime local temperatures rose by 3.6 degrees Fahrenheit (F) or 2 degrees Celsius. Forests have high canopies with varied surfaces, and the movement of winds over these rough surfaces creates turbulence and cools the air. Low, even croplands on the other hand create less turbulence from winds and don’t cool the air as much, the researchers found.

When grasslands were replaced by crops in the model, warming occurred because crops were only about half as efficient with water as the drought-adapted local grasses and therefore transpired less. Transpiration is a daytime process where water evaporates from the leaves during photosynthesis and cools the air.

The paper, appearing in the current issue of the Journal of Meteorology and Atmospheric Physics, used NASA’s Landsat images acquired between 1975 and 1999 to provide data of the steady conversion of forest and grassland to cropland. Data from the Advanced Very High Resolution Radiometer aboard the Polar Orbiting Environmental Satellite were used to account for seasonal changes of the vegetation.

The researchers entered these and other data of the tropical forest into the Simple Biosphere (SiB2) model, which was developed by NASA. Climate conditions of the Santa Cruz area were obtained from a separate model. This separate model was not influenced by temperature changes that occurred in the SiB2 simulations. Bounoua and colleagues then kept all the conditions the same but changed only the quantity and type of plants as they were converted to crops over time.

NASA’s mission is to understand and protect our home planet by studying the primary causes of climate variability, including what changes are occurring in global land cover and land use, and their causes and impacts. This research was funded by NASA.