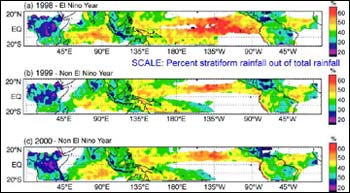 EL NiñoS STEADY PACIFIC RAINS <br> <br>These composite images show that the largest amounts (red) of stratiform rain, up to 60%, occur in the central Pacific during El Niño, such as occurred in the 1998 event. 1999 and 2000 were not El Niño years. CREDIT: University of Washington/NASA <br>

Scientists using data from a NASA satellite have found another piece in the global climate puzzle created by El Niño. El Niño events produce more of a steady rain in the middle of the Pacific Ocean. This is important because whenever there is a change in the amount and duration of rainfall over an area, such as the central Pacific, it affects weather regionally and even worldwide.

The findings appeared in a paper authored by Courtney Schumacher and Robert Houze, atmospheric scientists at the University of Washington, Seattle, who used data from NASA’s Tropical Rainfall Measuring Mission (TRMM) satellite to look at rainfall over the Pacific during the 1997-1998 El Niño. The study was published in a recent issue of the American Meteorological Society’s Journal of Climate.

El Niño occurs when warm water shifts from the western to the eastern Pacific Ocean and trade winds that usually blow from east to west across the equator diminish. As a result, rainfall patterns around the globe change during the life of these periodic climate events, and in some areas create floods or droughts. By identifying the changes in rainfall in one area of the globe, such as the central Pacific Ocean, scientists continue to piece together the El Niño puzzle that will help them improve rainfall forecasts around the world during the life of El Niño.

“Instead, the rainfall we saw is called ’stratiform rain,’ which are weaker rains that cover larger areas,” Schumacher said. It’s the type of rain that makes people want to stay inside all day.

Heat released at different levels of the atmosphere affects the vertical and horizontal movement of air. As a result, the heat from different types of rain can alter weather patterns, such as the familiar jet stream which impacts the United States. Weather prediction models benefit from better knowledge of the changing jet stream patterns, because storms like summer thunderstorms and winter snowstorms follow the path of the jet stream.

The researchers noted that because increased stratiform rains warm the upper levels of the atmosphere, that additional heat strengthens the way air moves higher up and over a larger area than thunderstorm-generated rainfall. The larger area of air affected can impact weather patterns around the world.

Although scientists are still uncertain why such large amounts of stratiform rain happen in the middle of the Pacific, especially during El Niño, observations from the TRMM satellite have allowed them to recognize this pattern. By identifying the type of rainfall, climatologists and meteorologists can make better rainfall forecasts in other areas of the world during the event.

“That’s the beauty of NASA’s TRMM satellite,” said Jeff Halverson, TRMM outreach scientist from NASA’s Goddard Space Flight Center, Greenbelt, Md. “TRMM can see what’s happening in remote areas of the tropics that can have affects on the rest of the world.”

TRMM is a joint NASA/Japanese Space Agency mission to study tropical rainfall and its implications for climate. Each day, the TRMM spacecraft observes the Earth’s equatorial and tropical regions.

This research was funded by NASA’s Earth Science Enterprise (ESE), the National Science Foundation and the National Oceanic and Atmospheric Administration. NASA’s ESE is dedicated to understanding the Earth as an integrated system and applying Earth System Science to improve prediction of climate, weather and natural hazards using the unique vantage point of space.