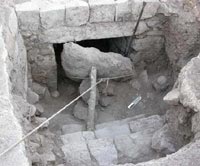 The 1,500-year-old subfloor Zapotec tomb before its huge door was removed. <br>Photo by Linda Nicholas; Courtesty of The Field Museum

On a high hilltop terrace in Oaxaca, Mexico, a team of Field Museum archaeologists discovered a 1,500-year-old underground tomb while excavating a palace-like residence. Although it was near the end of their excavation season, they dared not leave the tomb unexplored. News of this find at El Palmillo was sure to get around, and looting would follow. As it was, workers had to guard the tomb every night until the tomb was excavated.

Images of the stone-lined interior – snapped with a digital camera and flash through an exposure created long ago when the door of the tomb shifted – helped plan the excavation and showed that the tomb remained in good shape.

“These first images were instrumental in helping us plan the tomb excavations even before we were able to enter the tomb,” said Linda Nicholas, adjunct curator of anthropology at The Field Museum. Before entering the tomb, the team carefully removed earth and rock rubble on the stone steps leading down to the door, a huge stone that required seven workers to move.

Their efforts were well rewarded. The subfloor tomb turned out to be one of the most elaborately constructed subterranean masonry tombs found outside the ancient Zapotec capital of Monte Albán. And it had never been looted.

The Zapotec was one of the most important cultures (in what is now Mexico) at the time of the Maya. “The importance of this tomb is that it tells us that even at a site on the fringe of the Oaxaca Valley, the Zapotecs followed burial customs that were similar to those followed in Monte Albán, the regional capital,” said Gary Feinman, PhD, chair and curator of Anthropology at The Field Museum. “It also tells us that there was more status differentiation at the top of El Palmillo than lower down the hill.” A brief report of the tomb’s discovery will be published in the September/October issue of Archaeology Magazine.

The remains of three persons were found in the tomb, although there are hints that earlier tomb contents may have been removed by terrace residents and re-interred elsewhere before the tomb was sealed. One person was interred in a seated position and wore a single green stone bead, both signs that the occupants of this complex were privileged and that those interred in the tomb had high status. Some of the bones found in a wall niche were covered with red paint.

The tomb included three wall niches, each filled with ceramic vessels. Twenty-five ceramic vessels dating to the latter part of the Classic period (c. AD 500-700) were found. Remnants of another 11 vessels, along with six loose teeth fit with stone drill plugs and having other dental modifications, were discovered in front of the door or on the steps leading down to the tomb.

Archaeologists Feinman and Nicholas have been excavating at El Palmillo every summer since 1999. In prior seasons, they excavated tombs on other terraces in which much sediment had seeped in, making the excavation of dirt from the tomb contents an exceedingly slow process. This tomb, however, was free of debris and relatively undamaged.

“The tomb was well constructed, which kept soil and rubble out, but not water,” Dr. Feinman said. “The wet and dry cycles decomposed the bodies and some of the bones.”

The Oaxaca dig was featured on expeditions@fieldmuseumTM, a free interactive online program through which Field Museum scientists share their discoveries and describe their experiences in the field. In addition to email dispatches, a companion Web site features expedition photographs, video reports, interactive site maps, and research details. To access all the images and reports from the Oaxaca dig, visit http://www.fieldmuseum.org/expeditions/gary2_expeditions/about.html.

This fall, the field adventures continue. In September, expeditions@fieldmuseum will host a follow-up Q&A session with paleontologist Lance Grande, PhD, the leader of this summer’s fossil-collecting expedition to southwestern Wyoming. In October, expeditions@fieldmuseum will go behind the scenes with mammal collection manager Bill Stanley as he demonstrates what happens to the wide variety of specimens that arrive at the Museum each month. In November, it will descend to the bottom of the Pacific Ocean with zoologist Janet Voight, PhD, as she explores hot, toxic seafloor habitats.