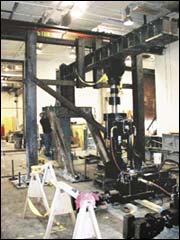 Real steel for a virtual structure: Physical stress administered to columns in this apparatus was translated into a digital simulation of how a building made from such columns would behave in an earthquake.

On Wednesday, July 30, as scientists all over the country looked intently on, a synthetic earthquake shook a half-real building.

But a third support column and the building floor that rested on them, forming a typical 1-story, 2-bay component of a modern steel frame building, existed nowhere but in software on chips. They were simulations, created by grid- linked machines at the National Supercomputing Center in Illinois and elsewhere.

Physical stresses on the real columns, hundreds of miles apart, produced a set of digital signals that interacted with the virtual structure.

The result was a realistic representation of the effects of an earthquake, creating a profusion of real time data — video images, records of stress and movements, and much more – – that was distributed by high-bandwidth connections to researchers in dozens of locations from NSF headquarters in Washington D.C. to California.

“This represents a genuinely new way of conducting earthquake engineering experiments,” said Carl Kesselman, director of the Center for Grid Technologies at the University of Southern California, who was a leader of the team that created the event.

The exercise was the first full-scale multi-site virtual temblor for NEESgrid, a resource creeated to used grid-linked computing resources to provide engineers with new ways to study how earthquakes affect structures.

NEESgrid is consortium of institutions led by the National Center for Supercomputing Applications at UIUC that includes USC, the Argonne National Laboratory and the University of Michigan. It is part of the George E. Brown, Jr. Network for Earthquake Engineering Simulation (NEES) project.

The USC School of Engineering has a double involvement in the consortium. Besides the work of Dr. Kesselman´s center at the Schools´ Information Sciences Institute, Dr. Erik Johnson and the USC department of civil and environmental engineering are playing an important role.

In addition to the NCSA, the University of Illinois Mid-America Earthquake Center and UIUC department of civil engineering are also participants.

Kesselman´s longtime partners in the development grid technology at Argonne National Laboratory, the team led by Dr. Ian Foster, are also part of the consortium, as well as Argonne´s material science division, along with the Collaboratory for Research on Electronic Work at the University of Michigan.

Kesselman and Foster´s groups created the “middleware” that allowed the experiment to proceed across continental distances, through Java interfaces.

USC´s Johnson, a structural engineer with substantial background in Information Technology, bridged the gap between Java and the Matlab computer language used by engineers.

The software and the experiment functioned as designed. “On a scale of 10, I would say it was a 9.5,” said Johnson, explaining it had gone almost completely as planned, with the only glitch being a network outage that had cut the 5- hour experiment about ten minutes short.

Another experiment is planned early next year, according to Johnson.

“The goal is to create a collaborative research network by linking researchers and engineering testing facilities across the United States, and providing them with the latest computational tools,” said Priscilla Nelson, NSF division director for civil and mechanical systems when NEESGrid was created in August, 2001.

“We expect this network to speed the simulations, experiments, and data analysis that lead to better seismic design and hazard mitigation.”

Development of NEES will continue through Sept. 30. 2004. A community-based NEES Consortium will operate the NEES collaboratory beginning in October 2004.