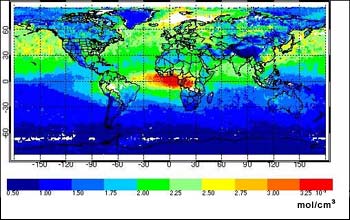 This image shows the vertical column of carbon monoxide (CO) for January, 2001, measured by NASA’s Terra satellite. The reds are the highest levels and blues show the lowest levels. The white areas have no data due to clouds. Pollution plumes from agricultural fires over northwestern Africa extend westward over the Atlantic Ocean. High pollution levels are seen in the green area from Asia out over the Pacific Ocean. Pollution over China is mostly from industrial emissions, and this plume sometimes reaches the U.S. west coast. Image and Caption Credit: David Edwards <br>

During summertime ozone near the Earth’s surface forms in most major U.S. cities when sunlight and heat mix with car exhaust and other pollution, causing health officials to issue “ozone alerts.” But in other parts of the world, such as the tropical Atlantic, this low level ozone appears to originate naturally in ways that have left scientists puzzled. Now, NASA-funded scientists using four satellites can tell where low level ozone pollution comes from and whether it was manmade or natural.

Atmospheric scientist David Edwards and his colleagues from the National Center for Atmospheric Research (NCAR) and collaborators in Canada and Europe have studied this problem using satellite data from three NASA spacecraft, one from the European Space Agency (ESA), and a computer model from NCAR. They were surprised to find that a greater amount of near-surface ozone over the tropical Atlantic develops as a result of lightning instead of agricultural and fossil fuel burning.

Their findings appeared in a recent issue of the American Geophysical Union’s Journal of Geophysical Research Atmospheres. The formation of ozone involves several factors, such as lightning and pollution from agricultural and fossil fuel burning, which is why it was helpful to use NASA’s multiple satellites to look at each in turn.

Because the different satellite instruments could detect fires, lightning flashes, and the resulting pollution and ozone in the atmosphere, respectively, they provided a bird’s-eye global view of what was going on, and the computer model helped tie all the pieces together.

Fires create smoke and carbon monoxide, and lightning creates nitrogen oxides (NOx). All of these come together with other unstable compounds in a chemical soup, and sunlight helps trigger the reaction that helps form ozone. The scientists found that in the early part of the year, the intense fires set by farmers for land-clearing and traditional cultivation in north-western Africa, just south of the Sahara Desert, resulted in large amounts of pollution that they could track using satellite images as it spread over the Atlantic towards South America. This pollution greatly increased ozone at low altitudes near the fires.

However, when Edwards and his colleagues looked at areas of elevated ozone levels measured by satellites and aircraft over the Atlantic south of the equator, they were more surprised to find that this ozone was caused mainly by lightning rather than the fires.

In other parts of the world, especially near cities, ozone near Earth’s surface is often made from pollution as a result of industrial fossil-fuel burning and cars. Understanding where the pollution comes from in each case is important for improving our air quality.

NASA’s Measurements of Pollution in the Troposphere (MOPITT) instrument aboard the Terra satellite is a joint NASA/Canadian Space Agency mission that measured carbon monoxide concentrations at various levels of the atmosphere. The TOMS instrument on EP/TOMS measured tropical tropospheric ozone over the mid-Atlantic. The TRMM satellite counted the number of fires in a region using its Visible/Infrared Scanner (VIRS), and also catalogued lightning flash data from its Lightning Imaging Sensor (LIS). The satellite data was then interpreted using the MOZART-2 computer model.

Previously, scientists used TOMS observations to get a general idea of where the tropospheric ozone levels were high, but it was often difficult to say where the ozone came from and which pollution source or natural process led to its creation. Only recently has the 4 satellite combination enabled scientists to make this distinction.

This research was funded by NASA’s Earth Science Enterprise (ESE), in cooperation with the National Science Foundation, sponsor of NCAR. NASA’s ESE is dedicated to understanding the Earth as an integrated system and applying Earth System Science to improve prediction of climate, weather and natural hazards using the unique vantage point of space.