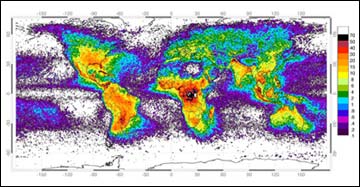 Lightning is dangerous, so improving our understanding of it and its role in weather and climate is important. NASA researchers at the National Space Science and Technology Center in Huntsville, Ala., created lightning maps that show where and how much lightning strikes worldwide. This data is important to climatologists, because lightning indicates the location of large storms that release latent heat; the “fuel supply” that helps drive the Earth’s climate “engine.”

The National Oceanic and Atmospheric Administration’s National Weather Service’s regional forecast offices in Alabama have been using NASA’s North Alabama Lightning Mapping Array since November 2001. The data have helped to characterize thunderstorm initiation, identify weakening and strengthening storms by the change in the rate of flashes, and evaluate the trend of the flash rate to improve severe storm detection and lead-time. Understanding lightning has the potential to improve severe storm warning lead-time by up to 50 percent and decrease the false alarm rate for non-tornado producing storms.

NASA’s lightning research is also being applied to aviation safety. NASA technology is helping aviators avoid turbulence, over offshore areas, by using surface lightning measurements and combining them with satellite lightning data and other measurements.

According to the National Weather Service, lightning kills an average of 73 people annually in the United States. Lightning kills more people than hurricanes or tornadoes. William Valine and Phillip Krider, two NASA-funded scientists from the University of Arizona, discovered lightning frequently strikes the ground in two or more places. This means the risk of being struck by lightning is 45 percent higher than previously thought.

NASA’s Earth Science Enterprise, which funds lightning research, is dedicated to understanding the Earth as an integrated system and applying Earth System Science to improve prediction of climate, weather and natural hazards using the unique vantage point of space.