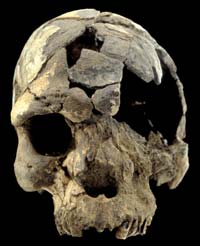 Scientists from the University of California at Berkeley along with researchers from Ethiopia and several other countries have uncovered fossils of the earliest modern human, Homo sapiens, estimated at 154,000 to 160,000 years old. According to the scientists, the findings provide strong evidence that Homo sapiens and Neanderthals co-existed, rather than the former descending from the latter.

In two articles appearing in the June 12 edition of the journal Nature, the authors describe the fossilized crania of two adults and a child uncovered at the Herto village in the Middle Awash study area of Ethiopia, about 140 miles northeast of its capital, Addis Ababa. The fossils fill a major gap in the human fossil record, the scientists report.

“We’ve lacked intermediate fossils between pre-humans and modern humans, between 100,000 and 300,000 years ago,” says UC Berkeley paleoanthropologist, Tim D. White, one of the project leaders. “Now the fossil record meshes with the molecular evidence.”

The discovery received major funding from the U.S. National Science Foundation (NSF), the independent federal agency responsible for supporting most of the nation’s fundamental research in nearly all areas of science and engineering.

According to F. Clark Howell, a professor emeritus of integrative biology at UC Berkeley and a co-author of the Nature article, “The Herto fossils are unmistakably non-neanderthal and show that near-humans had evolved in Africa long before the European neanderthals disappeared. They demonstrate conclusively that there was never a neanderthal stage in human evolution.”

The conclusion that these fossils represent a transition from more primitive African hominids to modern humans supports the “Out of Africa” hypothesis that modern humans evolved in Africa and not in multiple regions of the world.

In previous studies, White and his Ethiopian colleagues discovered hominid remains dating between 5.2 million and 5.8 million years ago. Those finds, of the genus Ardipithecus, are some of the earliest hominids known to date.

In 1999, White’s team announced the discovery of another hominid, dated to 2.5 million years ago, which may have been the direct ancestor of humans.