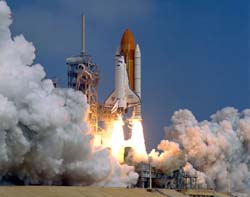 This image shows the launch of space shuttle STS-85 on August 7, 1997. The orange external tank contains over 700 metric tons of liquid hydrogen and liquid oxygen. The main effluent is water. The Stevens et al. results show evidence that this water was transported to the Arctic where it formed a vast region of polar mesospheric clouds covering an area about 10% of North America. Credit: NASA <br>

Exhaust from the main engines of NASA’s space shuttle, which is about 97 percent water vapor, can travel to the Arctic in the Earth’s thermosphere where it forms ice to create some of the Earth’s highest clouds that literally shine at night, according to a new study led by the Naval Research Laboratory and jointly funded by NASA and the Office of Naval Research.

The thermosphere is the highest layer in our atmosphere, occupying the region above about 55 miles (88 kilometers) altitude. The clouds settle to 51 miles (82 km) altitude in the layer directly below called the mesosphere. The stratosphere and the troposphere lie in that order below the mesosphere.

Dr. Michael H. Stevens, the paper’s lead author and a research physicist at the Naval Research Laboratory in Washington, reports that exhaust from the shuttle and other launch vehicles may help explain how some of these mysterious clouds are formed. The paper appeared on Saturday (May 31) in Geophysical Research Letters.

Noctilucent clouds, sometimes called polar mesospheric clouds when observed from space, are too thin to be seen by the naked eye in broad daylight. However, they shine at night when the Sun’s rays hit them from below the horizon while the lower atmosphere is bathed in darkness. They typically form in the cold, summer polar mesosphere and are made of water ice particles.

The study uses data from the Naval Research Laboratory’s Middle Atmosphere High Resolution Spectrograph Investigation (MAHRSI) instrument, launched on the shuttle for eight days of observation in August, 1997. MAHRSI allowed scientists to follow the plume’s rapid pole-ward transport and then to observe a discrete region of ice clouds as it appeared in the Arctic near the end of the mission. Stevens and colleagues find that the water contained in these clouds is consistent with the amount injected into the thermosphere by the shuttle on its ascent off the east coast of the United States.

“This study is important because it shows that there is a new source of water ice for the polar upper atmosphere,” said Stevens, lead scientist for MAHRSI. “Our results indicate that the water vapor released by launch vehicles can end up in the Arctic mesosphere.”

About half of the water vapor exhaust from the shuttle’s main fuel tank is injected into the thermosphere, typically at altitudes of 64 to 71 miles (103 to 114 km). Stevens and colleagues found that this water vapor can then be transported all the way to the Arctic in a little over a day, much faster than predicted by models of atmospheric winds. There is currently no explanation for why the water moves so quickly.

Stevens and colleagues also include observations from a ground-based experiment in Norway measuring water vapor moving toward the Arctic Circle. These observations reveal the passage of a large plume of water vapor overhead a little over a day after the same (STS-85) shuttle launch, confirming the plume trajectory inferred from the MAHRSI measurements.

As the water vapor moves to the Arctic it falls from the warmer thermosphere down to colder areas in the mesosphere. Over the North Pole in the summer mesospheric temperatures can plummet below minus 220 Fahrenheit (minus 140 Celsius), the lowest found in the Earth’s atmosphere. At these temperatures, water vapor condenses into ice particles and clouds form.

“The amount of water found here is tiny compared to the amount in the lower atmosphere,” Stevens said. “But the long term effects in the upper atmosphere have yet to be studied.”

The Office of Naval Research and NASA’s Office of Space Science funded the study.