A fiery debate about volcanoes 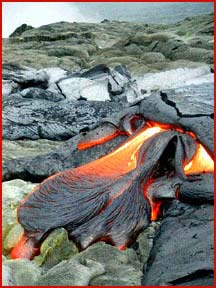 The premier example of a hotspot is Hawaii, which exudes lava at a higher rate per unit area than any other place on Earth.

In a Perspective in the May 9 issue of Science, geochemist Don DePaolo and geodynamicist Michael Manga defend a fundamental assumption of Earth science, the mantle plume model of hotspots, against an outbreak of seismic skepticism.

DePaolo and Manga are members of Lawrence Berkeley National Laboratory’s Earth Sciences Division and the University of California at Berkeley’s Department of Earth and Planetary Science. DePaolo studies the chemical signatures of geological structures like the lava beneath the island of Hawaii. Manga studies volcanism and other fluid processes using a variety of techniques, including physical models.

The premier example of a hotspot is Hawaii, which exudes lava at a higher rate per unit area than any other place on Earth.

On Earth, most volcanoes are tectonic in origin — they occur where crustal plates are spreading apart or colliding. This isn’t true for all volcanoes on this planet, however, and it’s an unlikely explanation for the active volcanism on other planets and moons of our solar system.

An additional volcanic mechanism, the mantle plume model, was proposed over 30 years ago and is almost as widely accepted as plate tectonics itself. A mantle plume is a source of extra-hot rock rising from deep in the planet — probably from the base of the mantle itself, where it meets the iron-rich liquid core.

Mantle plumes are thought to underlie “hotspots” far from plate boundaries, like those under the Hawaiian Islands or Yellowstone National Park. There also appears to be a source of hot rock under Iceland, lying much deeper than the source of melt that erupts at the mid-Atlantic ridge. Estimates of the number of hotspots in the world range from a handful to more than a hundred, but most scientists agree to a list of several dozen.

While plate movements can be observed directly, however, plumes under hotspots must be inferred from seismology. So when seismologists like Gillian Foulger of the University of Durham, United Kingdom, report no evidence for plumes under Yellowstone and Iceland, it’s a short step to the claim that plumes don’t exist at all. (Foulger is an author of a Perspective in the same May 9 Science presenting the “antiplume” view.)

“It seems to me that the critics don’t understand some aspects of the basic problem,” says DePaolo. “For example, they claim that the mantle beneath Iceland is not hot, and the mantle beneath Yellowstone is not flowing upward. My view of the data in the papers they cite is that it leads straight to the conclusion that the rock is hot and flowing upward, just as we expect for mantle plumes.”

DePaolo and Manga cite the strong evidence for deep plumes under at least a few hotspots. When a mid-ocean ridge moves right across a hotspot, as the Reunion hotspot in the Indian Ocean has done, the ridge doesn’t excavate the hotspot; instead, volcanism jumps from one plate to the other. Thus the hotspot source must lie deeper than the region of upwelling beneath the spreading plates.

In Hawaii, far from a plate boundary, so much magma is produced in a tight circle less than 100 kilometers across that it must be moving upward at some 50 centimeters a year — ten times faster than the movement of crustal plates (which move at roughly the speed of growing fingernails). The lithosphere under Hawaii is some 80 kilometers thick. For melted rock to exist that deep, the temperature must be 200 to 300 degrees Celsius hotter than the surrounding mantle.

Measurements of chemistry and isotope ratios by DePaolo and others also point to the deep origin of the lavas of Hawaii and other hotspots — an origin different from that of the relatively shallow-melt basalts of the mid-ocean ridges. Especially telling is the high ratio of rare helium 3 to common helium 4, a greater ratio characteristic of helium from the deep mantle. Similar information comes from isotopes of the elements neodymium, strontium, lead, and hafnium.

The evidence goes to “one of the central problems in Earth science,” says Manga, and not only because plume origins are key to making connections “between seismologically imaged regions and geochemically inferred reservoirs.” He explains that “because Earth’s core cools through plumes, understanding plumes is essential to understanding the energetics and evolution of the core.”

Manga’s studies of fluids, some involving what he calls “neat stuff in the lab,” like a heated fish tank filled with motor oil and soy oil, have shown how plumes can form from a superhot layer of rock at the core-mantle boundary. Like a gigantic growing mushroom, a plume breaks off and slowly rises through the mantle. At the surface it can burst out in titanic flood basalts like those seen in India, Siberia, and west of Yellowstone.

Most important, once a plume reaches the surface, its thin tail can stay in place for 100 million years or more — forming an open pipe from the core-mantle boundary, through which hot rock continues to rise. A plume’s persistence, once formed, is a natural physical explanation for the stability and longevity of hotspots.

The stationary Hawaii hotspot, for example, has traced out a chain of islands and seamounts 6,000 kilometers long as the Pacific Plate moves slowly across it. A symmetrical 500-kilometer-wide bulge in the sea floor beneath the island’s huge lava mass, lifted by the upwelling plume beneath, verges on direct, seeing-is-believing evidence for the existence of the plume.

DePaolo and Manga do not insist that all hotspots are caused by deep mantle plumes. The evidence is strong for half a dozen hotspots, but others may owe their persistent existence to different mechanisms.

Yet the poor resolution of present-day seismological images, and the many uncertainties involved in extracting information on density, temperature, and viscosity of deep rock from seismic wave paths, make for weak arguments against the existence of plumes.

“Many natural phenomena were well understood before instruments became sensitive enough to measure them directly,” says DePaolo — and that may be the case with seismology. DePaolo and Manga illustrate their Science Perspective with high-resolution seismic images, made with a new tomography technique recently developed by Guust Nolet and others at Princeton University, which map a thin column of high temperature in the mid-Pacific all the way down to the core-mantle boundary, 2,900 kilometers beneath the active volcanoes of Hawaii that sit atop it.

The Berkeley Lab is a U.S. Department of Energy national laboratory located in Berkeley, California. It conducts unclassified scientific research and is managed by the University of California. Visit our website at http://www.lbl.gov.