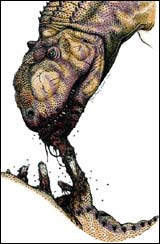 Artistic rendering of the theropod dinosaur <i>Majungatholus atopus</i> feeding from the remins of a conspecific <br>Credit: Artwork by Demetrios M. Vital <br>

The exotic island of Madagascar, situated off the southeast coast of Africa, was a dangerous place to live 65 million to 70 million years ago. Crocodiles swarmed in the rivers, and a 30-foot-long, meat-eating dinosaur named Majungatholus atopus stalked the plains. Like most carnivorous dinosaurs, Majungatholus had teeth perfectly suited for ripping into flesh. But what was on the menu? Until now, this question has remained a mystery.

In a report published in the April 3 issue of the Journal Nature, Raymond Rogers, a geologist from Macalester College in St. Paul, Minnesota, along with colleagues David Krause of the State University of New York at Stony Brook and Kristina Curry Rogers of the Science Museum of Minnesota, provide an answer. Majungatholus was a cannibal-it regularly dined upon members of its own species. It also fed upon the remains of other dinosaurs, including gigantic long-necked sauropods called titanosaurs.

“This research greatly expands our understanding of how dinosaur species related to each other in the context of their environment, and also serves as a way of increasing public awareness of and appreciation for the earth sciences,” said Rich Lane, program director in the National Science Foundation (NSF)’s division of earth sciences, which funded the research.

In their report, Rogers and colleagues document the first clear cut evidence for cannibalism among dinosaurs. The clues come in the form of distinct tooth marks (like those a dog might leave on a bone today) on Majungatholus bones, and they unquestionably point the finger at Majungatholus itself.

According to Rogers, the fossil evidence is compelling and unprecedented. “We have examined literally thousands of dinosaur bones from sites around the world, and we’ve never seen fossil material quite like this.”

Rogers and his colleagues are careful to rule out other potential suspects who lived alongside Majungatholus. “We examined the jaws and teeth of other known meat-eaters in the Malagasy fauna, including a much smaller carnivorous dinosaur called Masiakasaurus knopfleri, and two large crocodiles” stated Rogers, but only Majungatholus possessed the jaws and teeth capable of inflicting the damage the scientists saw.

“Despite the bad press that human cannibals receive, this discovery of cannibalism in a theropod dinosaur should come as no big surprise,” said Rogers. Cannibalism as a feeding strategy is very common in the animal kingdom today.” Animals ranging from insects to lions regularly consume members of their own species, and they do so for a variety of ecologic and evolutionary reasons, scientists believe.

With regard to dinosaurs, the only other example of a cannibal is the small Triassic theropod Coelophysis bauri, which is said to have the remains of juvenile individuals preserved in its stomach region. However, a recent reappraisal of the evidence suggests that claims of cannibalistic feeding by Coelophysis may be unsubstantiated, said Rogers. Not so in the case of Majungatholus. “We have the smoking gun in the form of diagnostic tooth marks, and we can definitely rule out all of the other carnivores known to have been on the scene,” said Rogers. “These tooth-marked bones are a ’snapshot’ of a day in the life-and death-of Majungatholus.”

Unfortunately, concluded Rogers, “we don’t know whether Majungatholus killed both of the individuals in our sample, or opportunistically scavenged their remains.” However, there is a good indication that Majungatholus lived during hard times.

In the Late Cretaceous Madagascar was characterized by a seasonal and semi-arid climate, much like that of Madagascar today. The ancient environment saw dramatic fluctuations in essential resources such as food and water, which apparently led to mass die-offs among animal populations. According to Rogers, Majungatholus may have scavenged from the carcasses of its own dead in order to deal with dire nutritional needs in times of environmental stress. “It appears as though Majungatholus atopus exploited all available resources during stressful episodes, even if it meant dining on members of its own species.”