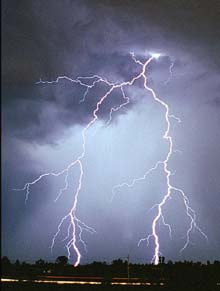 <b>Lightning Has a Big Effect on Regional Pollution</b> <br> <br>Summertime lightning over the United States increases regional pollution by significant amounts and also over a large portion of the northern hemisphere, surpassing those by human activities. CREDIT: Photograph by M. Garay

Lightning may be Mother Nature’s greatest show on Earth, but scientists now know it can produce significant amounts of ozone and other gases that affect air chemistry.

Researcher Renyi Zhang of Texas A&M University helped lead a study on the impact of lightning, and the results are surprising: Lightning can be responsible for as much as 90 percent of the nitrogen oxides in the summer and at the same time increase ozone levels as much as 30 percent in the free troposphere, the area that extends 3-8 miles above the Earth’s surface.

The amount of ozone and nitrogen oxides that lightning creates is greater than those created by human activities in that level of the atmosphere, the study shows.

Zhang’s research is published in the current Proceedings of the National Academy of Sciences and the study was supported by NASA and the Texas Air Research Center.

“The largest source of nitrogen oxides over the U.S. is the burning of fossil fuels, but such a small emission by lightning plays a huge role in influencing regional air chemistry. The reason is that nitrogen oxides from fossil fuels burning is released close to the Earth’s surface and is consumed rapidly by chemical reactions before being transported upward. But lightning directly releases nitrogen oxides throughout the entire troposphere, or as high as eight miles,” Zhang adds.

In addition, Zhang says there is strong evidence that urban air pollution may contribute to more lightning, creating more ozone over the United States. Zhang says nitrogen oxides can lead to the formation of ozone and smog, and these can greatly increase chemical reactions in the atmosphere.

Ozone can also affect chemical activities in the atmosphere and even affect climate changes around the world by acting as a greenhouse gas.

Zhang believes the results of his study show both good and bad news.

“The good news is that lightning makes more oxidants, which do help to clean up the atmosphere,” he says.

“The bad news is that lightning also generates more ozone, which is not good for the environment. We can’t control lightning, but we now know we can learn a lot about it and what it creates.”