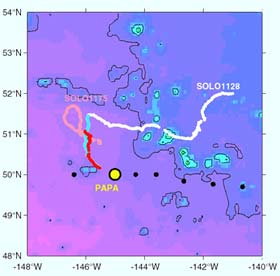 In the spring of 2001, two robotic Carbon Explorer floats recorded the rapid growth of phytoplankton in the upper layers of the North Pacific Ocean after a passing storm had deposited iron-rich dust from the Gobi Desert. The carbon measurements, reported in the October 25 issue of Science, are the first direct observation of wind-blown terrestrial dust fertilizing the growth of aquatic plant life.

A group of scientists led by oceanographer James K. Bishop of Lawrence Berkeley National Laboratory’s Earth Sciences Division engineered the deep-diving Carbon Explorers to measure particulate carbon in the upper thousand meters of the ocean. The Carbon Explorers are modified SOLO floats (Sounding Oceanographic Lagrangian Observers), originally designed by Russ Davis of the Scripps Institution of Oceanography to measure temperature and salinity at various depths. A growing number of SOLOs are now adrift in ocean currents around the world, as part of the international Project Argo to study ocean climate variability.

Two of the specially modified Carbon Explorers were launched April 10, 2001, from the U.S. Coast Guard’s icebreaker Polar Star near Ocean Station PAPA, in subarctic waters a thousand miles west of Vancouver Island. The Carbon Observers were programmed to sample the depths and return to the surface three times every two days, regularly sending data to satellites overhead. The two floats, controlled from shore, returned a virtually unbroken stream of information for the next eight months, through December, 2001.

Ocean Station PAPA, at 50 degrees north latitude, 145 degrees west longitude, is one of the few sites in the world whose waters have been studied for decades using shipboard instruments. PAPA thus provides an excellent baseline for observing variations in the carbon products of photosynthesis at different depths.

“The plants that fix carbon in the ocean typically live, reproduce, and die on day-to-week time scales,” Bishop says. “The beauty of the Carbon Observers is that they keep on working day in and day out, for seasons at a time, matching the biological rhythms of the sea in a way that ships and other systems cannot.”

Phytoplankton growth is affected by factors like nutrient concentrations, light, temperature, salinity, and the way the sea water mixes. Earlier studies at PAPA suggested that growth in the region was also limited by a lack of dissolved iron in the water. The Carbon Observers would soon put that assumption to the test.

Testing the iron hypothesis
In the 1930s oceanographers first began to suspect that terrestrial dust storms play a key role in phytoplankton growth in the so-called high nutrient, low chlorophyl (HNLC) areas of the ocean, whose concentrations of dissolved iron, an essential micronutrient, are much lower than in other regions. By dissolving carbon in seawater and by fixing it as biomass or inorganic particulate matter, phytoplankton regulates carbon dioxide in the atmosphere and thus helps regulate global climate.

In the 1980s, oceanographer John Martin gathered these facts in his “iron hypothesis,” which proposed that by fertilizing plankton growth with iron, global warming could be offset. Iron fertilization can indeed cause plankton “blooms” in HNLC waters, as several expeditions including Soiree (the Southern Ocean Iron Enrichment Experiment) in February 1999 and SOFeX (the Southern Ocean Iron [Fe] Experiment) in January and February 2002 have proved by pouring dissolved iron into HNLC areas in the Southern Hemisphere. But prior to the spring of 2001, fertilization by iron transported in terrestrial dust storms had never been observed directly.

Three days before the launch of the Carbon Observers on April 10, a NASA satellite recorded a large dust storm originating near the Gobi Desert in China and Mongolia; on the day of the launch, the dust cloud was over Japan and heading for the North Pacific. It reached Ocean Station PAPA on April 12, where it kicked up the waves and deposited a large amount of dust.

Although high waves temporarily kept the Carbon Observers from reporting by satellite, data collection continued uninterrupted through the storm. Five days after the storm passed, the floats reported rising concentrations of particulate organic carbon; the concentration almost doubled in the next two weeks.

Bishop notes that “the timing of this natural increase matched the timing of plankton growth after iron was artificially added to Southern Ocean waters during Soiree and SOFeX, a good indication that iron fertilization was the cause in the North Pacific as well.”

Plankton growth following the storm over Ocean Station PAPA was confirmed when NASA’s SeaWiFS satellite got a glimpse through the clouds and saw the sea surface turning greener with chlorophyll. These satellite observations further supported the supposition that iron and other micronutrients from the Asian dust storm had fertilized the phytoplankton.

For the first time, one of the key assumptions of the iron hypothesis had been observed in nature: wind-blown dust does stimulate plankton growth in otherwise unproductive waters. But how long is the atmospheric carbon thus taken up by phytoplankton sequestered in the ocean?

Jim Bishop and his colleagues hope Carbon Explorers and other instruments can soon find out what proportion of particulate organic carbon sinks all the way to the deep ocean. “Until we can answer that question with some precision, whether or not large scale iron fertilization of the ocean would be useful in slowing global warming will also remain unanswered. There’s a huge amount of science left to be done in the next decade to assess the ecological changes and the downstream effects of the technique. We’ve only scratched the surface.”

The National Oceanographic Partnership Program supported the development of the Carbon Explorers in a collaborative project including Berkeley Lab’s Earth Sciences Division, the Instrument Design Group at Scripps, and WETLabs, Inc. of Philomath, Oregon. Other agencies that supported the Carbon Explorer program at Ocean Station PAPA include the National Oceanic and Atmospheric Administration’s Office of Global Programs, the U.S. Coast Guard, and the U.S. Department of Energy’s Office of Science, Ocean Carbon Sequestration Program. For more on ocean carbon research at Berkeley Lab, visit http://www-ocean.lbl.gov.

“Robotic observations of dust storm enhancement of carbon biomass in the North Pacific,” by James K. B. Bishop, Russ E. Davis, and Jeffrey T. Sherman, appears in the 25 October, 2002, issue of Science.

The Berkeley Lab is a U.S. Department of Energy national laboratory located in Berkeley, California. It conducts unclassified scientific research and is managed by the University of California.