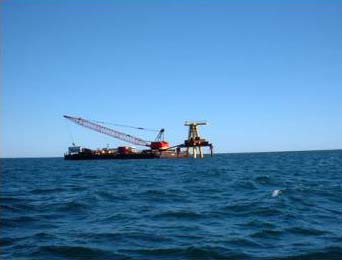 ASIT with platform in place

In the deep waters two miles south of Edgartown on Martha’s Vineyard, not far from where, two centuries ago, the likes of Captain Ahab and a thousand others kept their watch for the great white and his kin, we are now searching to understand another potential beast in those parts: the ocean and the weather.

But this is no allegory. Hoping to avoid any recurrence in these sometimes turbulent waters of the horrendous storms so intensely portrayed in Moby Dick as well as The Perfect Storm, the Office of Naval Research has built a tower bristling from top to bottom with sensors. The Air-Sea Interaction Tower will continually measure atmospheric and ocean conditions such as air temperature, humidity, solar radiation and carbon dioxide, as well as water temperature, salinity or salt content, wave height and direction, water circulation, current speed and direction, and sediment transport. It will directly measure momentum, heat, and mass exchange between the atmosphere and ocean. Anchored 50 feet down into the ocean floor, the tower extends 76 feet into the marine atmosphere. It will be maintained and operated by scientists at the Woods Hole Oceanographic Institution (WHOI) in Massachusetts and will be connected by undersea cables to WHOI’s Martha’s Vineyard Coastal Observatory (MVCO).

“No one has ever built this kind of thing before. Understanding how the ocean and atmosphere interact under all conditions, and understanding the factors that affect the exchange of energy between the ocean and atmosphere, how readily carbon dioxide is exchanged, and how currents and waves affect bottom sediments, makes for better weather forecasts,” says science officer Simon Chang who oversees the project for ONR. “Avoiding storms and correctly and precisely forecasting bad weather saves lives.”

Power and data transmission from the Tower are supplied the underwater cable linked to MVCO. Data gathered will be integrated with MVCO data and made directly available to all users and to the general public via the MVCO web site at http://www.whoi.edu/mvco. The data will include wind speed and direction, air and sea temperature, wave height and direction, and currents at the offshore site.

“This is a one-of-a kind platform for studying coastal processes in the Atlantic Ocean,” says James Edson of WHOI’s Ocean Physics and Engineering Department, who serves as project engineer. “It will be used by researchers, educators, and students from around the world during its lifetime.”

For more information on the ASIT, or to interview the scientists if you are media., please contact Gail Cleere at ONR, 703-696-4987 or email cleereg@onr.navy.mil.